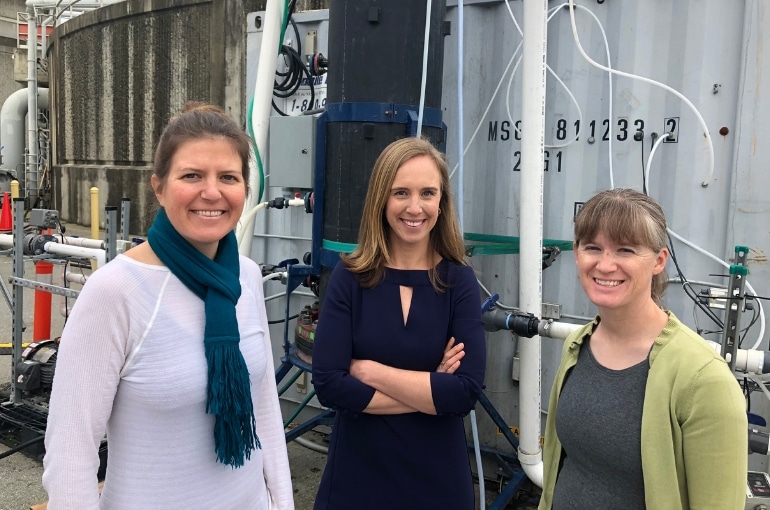 With today’s social and political climate, it can be hard to believe that irresponsible dumping of plastics and polymer-based materials still happens on a daily basis. Even the most environmentally conscious may be unknowingly polluting waterways and landfills when their persistent polymer-based fabrics break down in the laundry or they wash their faces with microdermabrasion cleansers containing microplastics.The unfortunate truth is this: we still have a long way to go when it comes to caring for our environment, and until substantial mindset and policy changes occur, our waterways and land ecosystems will continue to be polluted. Until we reach that moment, it may be better to face this truth and reduce the collateral damage associated with materials dumping as much as possible.Enter biodegradable materials.

Molly Morse has dedicated the better part of a decade of her life to studying and optimizing biodegradable materials. As a graduate student at Stanford University, she became extremely interested in the biodegradability of materials used for disaster housing. An engineer at heart, Morse focused on PHA (polyhydroxyalkanoate), an important component of biocomposites -- and an incredibly biodegradable polymer. But back then it was difficult to acquire PHAs: they were expensive, not a trivial fact for an academic research lab -- even one at Stanford.Fortunately for Morse, a group at Stanford pioneered a way to make PHAs from bacterial fermentation of methane. Her resource supply issues solved, Morse was able to focus on studying how PHA degrades naturally. And though she was initially inspired by disaster relief housing, Morse soon began thinking about plastic and polymer-based materials more broadly. What if there were a way she could create materials optimized to break down in landfills or in oceans, so that if they found their way there, they wouldn’t add more insult to our already injured environment?And that’s how Mango Materials was born.With first funding from a National Science Foundation grant in 2012, Mango Materials focuses on the production of PHAs from methane and biopolymer formulation. Typically, plastic pellets (also known as chips) are melted down to make something -- film for plastic bags, or fiber for yoga pants, for example. At Mango, biodegradable PHA serves as the backbone for an alternative plastic pellet, which is optimized for biodegradability while preserving optimal mechanical characteristics. So, whether you’re using a plastic bag for your groceries or a case for eye-shadow, Mango Materials is developing a product you can use guilt- and worry-free.The Mango team is always thinking about the “end-of-life” or the “design for next use” of their products -- where they might ultimately end up; for example, a wastewater treatment plant or the ocean. “We spend a lot of our time looking at biodegradability in anaerobic environments, marine environments, backyard compost,” says Morse, “making sure that it's completely digestible, making sure there's no intermediate that could be persistent, or that you're not inversely having something that's toxic accumulating”This all sounds fantastic for the environment, right? Indeed, Mango Materials is helping fill the need for greener materials that won’t pollute the Earth’s ecosystems -- but they’re doing it in a way that also uses methane, a greenhouse gas, as a feedstock -- a two-for-one punch as it were. Or, as Morse calls it, Mango’s “gift with purchase.”

The case for methane

Using microbes to ferment a gas instead of sugar is no easy task. You have to jam the gas into solution so that it can be taken up by microbes, and the microbes that Mango uses require both methane and oxygen -- a potentially explosive mixture. Not just any bioreactor can handle gas fermentation, which is why the Mango team has their own fermenter design. So why all the trouble? Why not make PHAs using sugar fermentation instead?“If you look at the carbon conversion of using methane as a feedstock, it's significantly favorable to be using methane -- especially if you look at the price, dollar per gram of carbon and methane and you convert that to dollars of sales from the PHA,” says Morse. Specifically, two-to-three pounds of methane is needed to produce one pound of PHA.There is also no need to ensure a “clean” input -- dirty gas can be pumped directly into the system without the need for pre-treatment like traditional feedstocks. And there is the capability to go big with methane -- there is no shortage of it. For now, Mango Materials is partnered with Silicon Valley Clean Water, the wastewater treatment facility in Redwood City, CA (in fact, they are located adjacent to the anaerobic digester) -- but that will quickly change once the company has scaled up their processes.“We have a lot of interest from methane producers, not just from anaerobic digesters, but also from landfills, abandoned coal mines … it's an issue for these producers what to do with their methane,” says Morse. Which leads us to perhaps the most obvious advantage of all to using methane as a feedstock: when your feedstock is recycling a greenhouse gas that is 30 times more harmful than carbon dioxide, it seems like a no-brainer.

Morse is careful to emphasize that while the company is creating products optimized for the “what-if” scenario, that doesn’t mean that Mango Materials condones or encourages dumping of materials where they don’t belong. One of the reasons irresponsible dumping continues to happen is consumer confusion around what plastics and polymers even are -- a confusion that is aided in no small part by deceptive advertising and flip-floppy legislation around terms.Morse has seen some companies advertise a product that’s compostable in the ocean -- impossible, as compost is an environment, not a process per se. Instead, things are biodegradable in the ocean, biodegradable in compost environments -- so such labeling, which contradicts other labels and terms consumers may see, only adds to the confusion. Some of the legislation that State of California has enacted around plastics and polymers also leads to confusion, with terms being used interchangeably (and incorrectly) depending on where the technologies are based from or what they’re targeting, says Morse. And she hopes to change all of this.“This is something that we want Mango Materials as a brand to really be a leader of -- it’s extremely important to us that Mango Materials is seen as the solution to biodegradable materials, or at least a trusted source of information.”This is not a chunk that most companies bite off, and indeed Morse has been advised not to engage in policy and public education. But to Morse, this isn’t an issue that is up for debate -- she has seen the confusion surrounding GMOs and how that has harmed consumer acceptance of elegant food solutions to some of the world’s most pressing problems.“It’s not too late ,” says Morse, “we're not to the point yet, that gene editing, GMO have there's this negative connotation.” And, if she meets her goals, perhaps we will never reach that point. One thing is for certain -- if Mango Materials is to succeed both in ushering in the next generation of biodegradable materials and improving consumer understanding around bioplastics -- it doesn’t stand a better chance than it does with Morse at the helm. The challenges she has faced to get Mango off the ground are many: she’s using a novel feedstock and a methanotrophic organism that isn’t heavily industrialized, a non-drop-in replacement polymer, a biological technology in Silicon Valley (“we’re not an iPhone app,” says Morse), and she’s a PhD trained engineer (which, she says, causes many investors to turn a deaf ear because you’re viewed as being “too nerdy”). Oh, and she’s a woman who’s managed to command the attention and respect of CEOs and entrepreneurs around the world -- even those from countries where women don’t have the rights to lead companies.“For better or worse, people remember me,” says Morse. “Maybe I just have tough skin,” she adds, laughing.Or maybe, just maybe, she has a technology that will help save the planet.Learn more about biodegradable materials at SynBioBeta 2019, October 1-3 in San Francisco, CA.