Are programmable plants the future of farming? 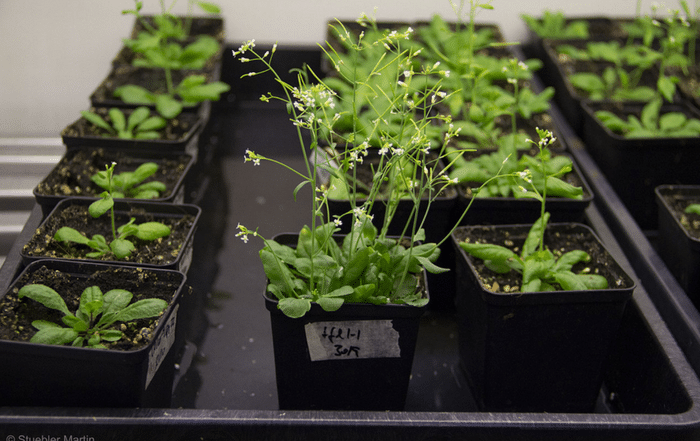 Are programmable plants the future of farming?

After publishing On The Origin of Species, Charles Darwin turned his formidable attention away from grand theories of evolution and towards another biological mystery: the subtle behavior of plants.At his home in Downe, England, he and his son Francis conducted a series of simple experiments. Potted plants were placed near bright windows or in darkened rooms with only a single dim lamp. The men carefully measured how young grasses twisted and bowed towards the light. Their research would eventually help scientists decipher the molecular language that governs how plants grow and respond to the world around them.Plant cells use hormones to communicate. Hormones can signal that it’s time to blossom, drop leaves or even defend against pests. Though the Darwins didn’t know it at the time, they were witnessing the effect of a master plant hormone known as auxin.In a new report, scientists at the University of Washington describe a tool for hacking into the hormone system of plants. Using hormone-responsive gene circuits, the team was able to program a small laboratory plant to grow more or less branched depending on whether it was sprayed with auxin. This technology may one day be used to control other complex plant traits.

“Auxin is like a currency in plant cells,” Eric Klavins tells me. Plant cells produce, exchange and respond to auxin at every stage of life. Klavins, a professor of electrical engineering at the University of Washington, believes plant hormones like auxin are key to engineering the plants of the future.

Eric Klavins, University of WashingtonUnlike conventional genome engineering which permanently alters the gene expression profile of a plant, genetic circuits allow specific genes to be toggled on or off at different times during the life of an organism. This is possible because genetic circuits, like electronic circuits, can be programmed to respond to their environment. With the right gene circuit in place, cold temperatures may signal a plant to delay fruiting, and an artificial hormone could be the signal to start up again. “It’s all about programmability,” says Klavins.The team calls their new gene circuits HACRs (pronounced hackers), short for hormone activated Cas9-based repressors. Because HACRs use a modified version of the Cas9 protein from the CRISPR system, they can be programmed to act on virtually any plant gene, including those involved in growth, photosynthesis, pathogen response, fruiting and more. HACRs work by repressing the expression of one or more genes until they are triggered to stop by a specific hormone like auxin. The hormone may be produced naturally in the plant or applied in the field.

B,C) Representative pictures of T3 plants of the same age without (B) and with (C) a gRNA targeting an auxin HACR to regulate PIN1.Klavins believes hormone-sensitive gene circuits have unique advantages. First, they interface with natural hormone signaling pathways, enabling plants to churn out pesticide only when needed, for example. Second, they can be ported into yeast where they can be tuned and built upon more easily.

The future of farming?

“I regularly tell my students,” says Jennifer Nemhauser, a biology professor at UW who also spearheaded the development of HACRs, “that if you want to decrease human suffering on this planet, the most effective use of your time will be to try to improve agriculture.”

Jennifer Nemhauser, University of WashingtonNemhauser spent the early part of her career studying how flowers develop. A desire for a more quantitative understanding of plants eventually led her to systems biology. But when she and Klavins crossed paths as associate professors at UW nearly ten years ago, a unique collaboration was born. “I realized then that I’m not a systems biologist, I’m a synthetic biologist,” Nemhauser tells me.So why build a gene circuit that controls branching in a small laboratory plant?“We know that if you can control branching, you can control yield,” says Nemhauser. “This is the traits that the first green revolution acted upon. If you can make a dwarf plant that is less bushy, you can hugely increase yield — that’s what happened with wheat and it led to an enormous number of people becoming more food secure.”Despite good intentions and considerable success, however, Nemhauser believes the first green revolution was marred by colonialist thinking. Farmers around the world were encouraged to give up heritage crops in favor of heavily modified Western crops like corn and wheat. “There are real issues with having that model continue,” she says.

Nemhauser LabBecause complex traits like root development, temperature sensitivity and pest defenses are genetically encoded and largely conserved across different species, new genetic circuitry developed in one plant may transfer to many others. “We’re not always looking for something that is off-the-charts best; We are looking for something that’s better,” says Nemhauser. “If you can go into cassava, peanuts or cowpeas — crops that are only lightly domesticated — and make them into better crops, that is, more resistant to drought, less likely to fall over in the wind, or better at putting energy into the part of the plant that we eat, then people can get more of what they want.”Will the public ever be comfortable eating programmable plants given widespread misgivings over conventional genetic engineering? Klavins in cautiously optimistic. He believes we should all be “be skeptical, but not scared” of where agricultural biotechnology is going. The technology will have to prove itself in the field, and, ultimately, consumers will be the judge. “I’m happy to go slow on this,” he says.