Building DNA on a chip: a novel approach to gene synthesis 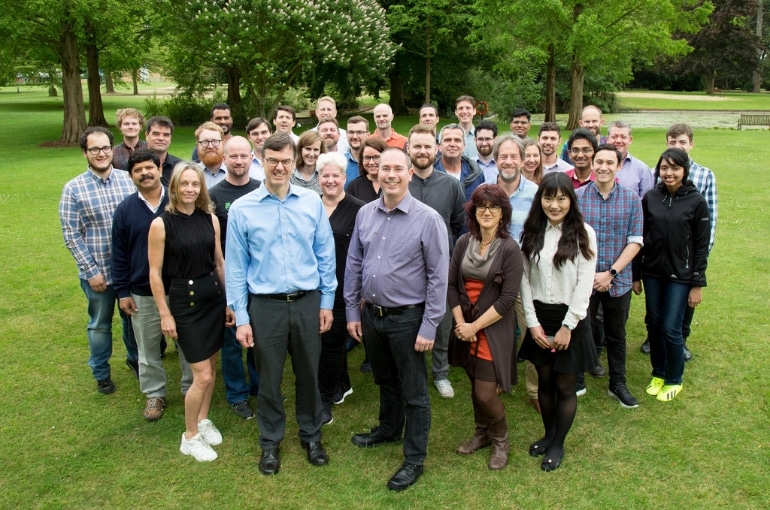 Building DNA on a chip: a novel approach to gene synthesis

In the 1970s and 1980s, DNA technology made a giant leap forward. Artificial DNA synthesis by the phosphoramidite method and amplification of DNA by PCR became the new norm. The result: a machine (or ten) in every biology lab around the world, each relying on DNA synthesis companies to provide short oligonucleotide primers to amplify the DNA they had and to create the DNA they didn’t. The synthetic biology revolution has created a huge demand for high-quality oligonucleotides, resulting in several companies developing novel approaches to DNA synthesis.The phosphoramidite method hasn’t changed over the past three decades. In this, nucleotides are added one at a time to the 5’ hydroxy terminus to form an oligonucleotide chain. Typically performed in a single well, the phosphoramidite cycle involves several chemical steps: de-protection, coupling, capping, and oxidation. Control of the reaction is afforded by the capping step, which prevents more than one nucleotide being added at a time. This cap is removed in the chemical de-protection step, allowing the cycle to begin anew.

The phosphoramidite method of oligonucleotide synthesis. (Public domain image.)The process is not without its difficulties. Error-free yield decreases exponentially with the length of the oligonucleotide. At lengths of 500 nucleotides, a 1 in 200 error rate predicts that less than 10% of synthesised DNA oligos are error-free, a problem that current synthesis techniques are unable to rectify. Yet for three decades this has been the gold standard of gene synthesis.Evonetix, a British synthetic biology company, is developing a novel approach to gene synthesis that seeks to disrupt the entire field. The company’s technology is a well-free, silicon chip-based system that uses heat to regulate the chemical steps involved. This novel approach to the phosphoramidite cycle allows more controlled oligonucleotide assembly and, crucially, for quality checking during the assembly process. This technology will enable researchers to perform DNA synthesis accurately and easily in house.

Designing the future of DNA synthesis

Usually, artificial DNA synthesis is performed in individual wells for each oligonucleotide before these are assembled into longer double-stranded DNA. Evonetix has developed an entirely different approach with heat-controlled, chip-based technology, creating islands of independently controlled temperature within a continuous flowing liquid -- an approach the company calls “virtual wells”. These virtual wells control the synthesis of individual oligonucleotides, re-shaping the phosphoramidite cycle.Evonetix’s chip combines CMOS technology – just like a computer chip – with custom silicon MEMS (Micro-Electro-Mechanical Systems). The chip can accommodate many thousands of independent temperature control sites and, combined with thermally labile reagents, the oligonucleotide synthesis steps of the phosphoramidite cycle can be recreated faithfully with great selectivity. This method of thermal control also allows errors to be detected and removed during assembly, enabling significantly higher fidelity of double-stranded DNA synthesis in comparison to current approaches, where high error rates represent a major limitation.Virtual wells at different temperatures can be maintained in close proximity in a continuous flow due to an innovative method of temperature control. An array of standard heaters would quickly create a runaway heating effect – like a miniature kettle on a microchip stove. To overcome this issue, Evonetix has developed a novel closed-loop thermal control system in which each element can either heat or cool the liquid above it.

Novel chip design regulates heat precisely using a control circuit and proprietary heater/cooling mechanism allowing thermal “virtual wells” to form in flowing liquid medium. (Image: Evonetix)A heater on each active site pumps heat into the liquid. Under the chip lies a cooling mechanism, constantly drawing heat from the liquid through a material of controlled thermal resistance. The opposing heat flows enable the chip to either heat or cool the liquid by electrically controlling the heater. Core to Evonetix’s MEMS technology is the ability to make controlled thermal resistance insulators that separate the heater and cooling mechanism, with a silicon dioxide platform sitting on top of hollow pillars. This set-up allows the formation of a column of heat in a continuously flowing liquid, whilst maintaining cooler temperatures around each well.Control of this temperature requires clever circuitry on a small scale. A temperature sensor at the active site feeds back into the controller, which compares this with the temperature demand required. The controller feeds its signal into a control algorithm, which also gets information from a temperature sensor located at the cooling mechanism. The algorithm then decides how much heat should be applied to maintain the demanded temperature. The result is independent dynamic and precise (0.1oC resolution) control across a range of temperatures (20 to 90oC). Evonetix is currently developing an ASIC (Application-Specific Integrated Circuit) to manage power delivery and temperature sensing locally for a scaled-up version of their chip.

The oligonucleotide synthesis process has been dominated by a chemical phosphoramidite cycle for the past three decades. Temperature-controlled DNA synthesis allows not just for novel oligo building, but also quality control during assembly into DNA.In the standard phosphoramidite cycle, DNA strands are unblocked chemically before the addition of a specific nucleotide which binds and extends the chain. In the virtual well, DNA is attached by a thermolabile linker and capped with a second thermolabile protecting group at the 5’ hydroxy position. A targeted heat step unblocks only the sites that need to be extended, and this coincides with the next nucleotide being flushed over the entire chip. Only those oligos that have been heated will be extended. This allows many different sequences to be synthesised in parallel on a single chip sharing the same liquid medium. Evonetix is currently validating thermally controlled oligo growth on glass bead columns for all four nucleotide reagents.When synthesised, the oligos can be selectively cleaved by the thermally cleavable linker, which is activated under chemical conditions orthogonal to the thermolabile 5’ protecting group. As they share the same liquid medium, the oligos can be transported to still-attached partner sequences for on-chip assembly. Dielectrophoretic traps prevent diffusion of the oligos, confining them during release and transport. DNA assembly on-chip in a virtual well then allows for something uniquely special in DNA synthesis: quality control throughout the assembly process.

Specific sites on the chip are heated to de-cap, in order to de-protect, oligos in thermal virtual wells (top left). A new base addition is washed over all wells, binding only to the de-capped oligos (top right). Extended oligos are thermally de-coupled from the base (bottom left) to match with partner oligos. A quality control heat test detects mis-matched pairings which can be discarded (bottom right).Ordinarily, quality of DNA can only be checked after everything has been synthesised and purified. In a virtual well, however, DNA mismatching is easily identified. Once oligos are annealed, the site is heated to a precise, sequence-dependent temperature at which dissociation will be faster for imperfect matches, allowing the population of oligos to be purified by discarding imperfect oligos in the flowing liquid. This allows for longer sequences with low error rates, preventing bad sequences from diluting the population of correct molecules. The benefits increase proportionally to sequence length – a higher fidelity compared to conventional assembly – and is unique to Evonetix’s technology.Evonetix plans to develop this as a product instead of a service, democratizing gene synthesis and giving power to individual labs to synthesize their own DNA constructs in the range of several kilobases in a single run with very high accuracy. The company’s technology has the potential to be vastly superior to current approaches and is broadly applicable to all synthetic biology applications.