Cultivated Meat Likely to Make Up 40% of Future Meat Intake 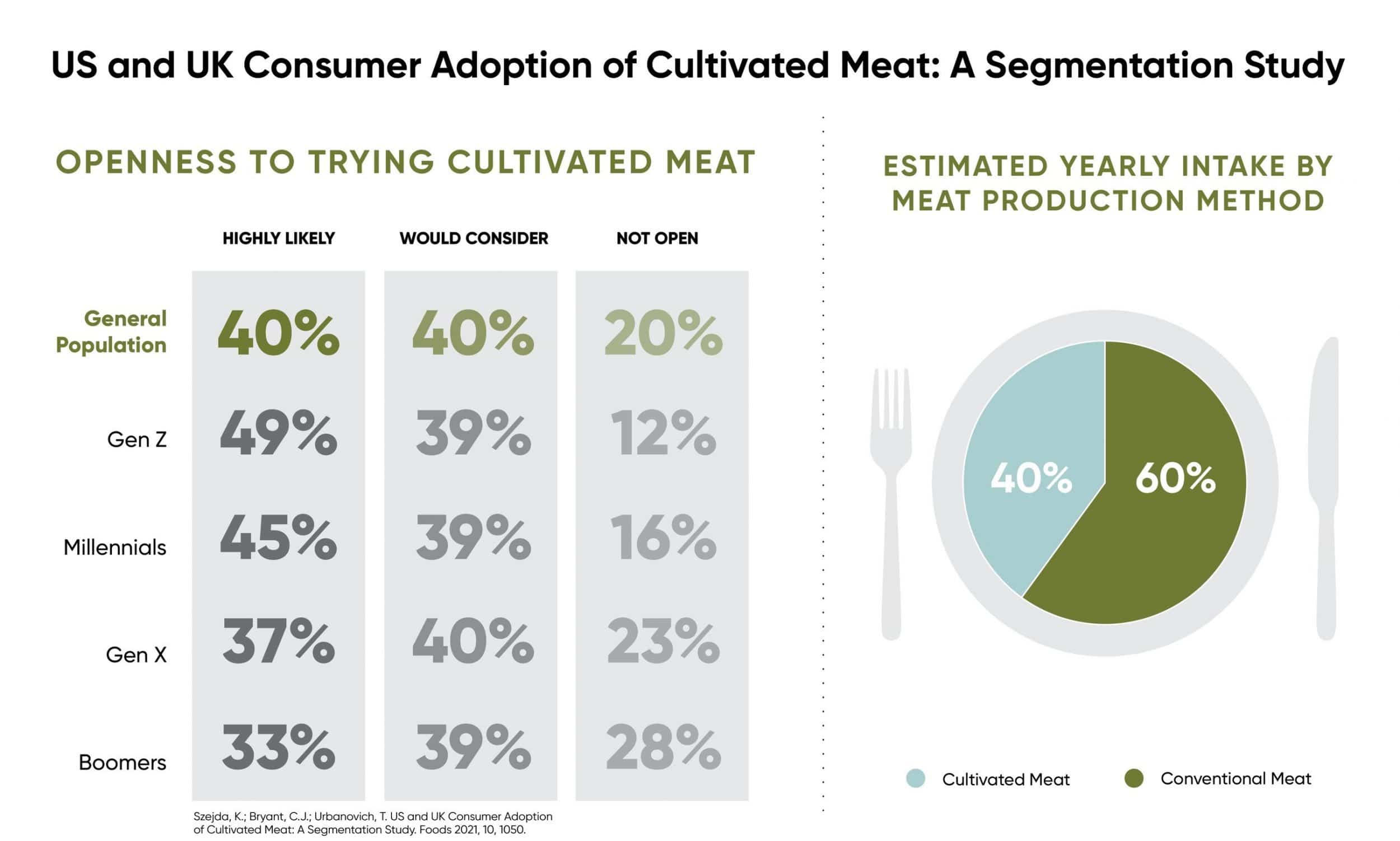 Cultivated Meat Likely to Make Up 40% of Future Meat Intake

Consumers envision cultivated meat to be a significant part of the meat market; Study reveals compelling support among young Britons and Americans.REHOVOT, Israel, May 11, 2021 /PRNewswire/ -- The research, published on May 11, 2021 by the journal Foods, affirms that cultivated meat is likely to make up a major part of consumers' future diets. The study showed patterns of greater openness to trying such products by younger generational groups: 87-89% of Gen Z adults, 84-85% of Millennials, 76-77% of Gen X, and 70-74% of Boomers were at least somewhat open to trying cultivated meat.Led by Keri Szejda, Ph.D., the researchers surveyed a large, representative sample of 2,018 US and 2,034 UK consumers, assessing indicators of adoption among the general population, and by generational segments.The majority of consumers surveyed were not familiar with cultivated meat, yet upon being presented with a description of the innovation, the respondents, on average, imagined that cultivated meat could make up about 40% of their future meat intake, with conventional meat constituting around 60%.Honing in on the findings of the survey, which segmented the participants by age and by degree of enthusiasm, 40% of consumers were "very" or "extremely likely" to try cultivated meat in both the US and the UK. This group of enthusiastic triers was categorized as the "early majority" group. Of the early majority group, an overwhelming 98-99% of them said they would consider welcoming it as a regular item in their shopping basket. The vast majority of the early majority are omnivores (94-95%) who consume meat 2-3 times per day in a typical week."In order to turn this expected acceptance into actual consumption patterns over time, it is critical to develop the right products, based on the right solutions," says Didier Toubia, Co-Founder and CEO of Aleph Farms, which commissioned the research. "In the long term, Aleph Farms' vision is to provide a better alternative to industrial livestock farming, which represents approximately 70% of global meat production today."Younger generations — the early adopters"The results suggest that cultivated meat is likely to be widely accepted by the general public, especially the younger generations and an eager group of early adopters who appreciate its benefits across a wide range of social issues. These groups tend to embrace change and need little encouragement to try new food innovations," notes Szejda, Ph.D., Founder and Principal Research Scientist of North Mountain Consulting Group. "Additionally, we observed an increase in support for the technology once consumers had access to additional information, underscoring the importance of effective science communication for consumer adoption."Sociodemographic analyses comparing the early majority groups to the general population suggest that the early majority are more often younger (Gen Z or Millennials), male, more liberal, and more educated. In the US and the UK, an average of 77% of Gen X and 74% of Boomers were open to trying it, in comparison to 85% of Millennials, and 89% of Gen Z."In contrast to the younger eager adopters, the older generations are more wary of change," explains Toubia. "Social proof is important to them and they want to be assured that a product is safe, functional, and beneficial before they adopt it. This is why transparency and trust are cornerstones of our company," concludes Toubia.About Aleph Farms:Aleph Farms is a food company that is paving a new way forward as a leader of the global sustainable food ecosystem, working passionately to grow delicious beef steaks from non-genetically engineered cells, isolated from a cow, using a fraction of the resources required for raising an entire animal for meat, and without antibiotics. Aleph Farms was co-founded with The Kitchen Hub of the Strauss Group and with Professor Shulamit Levenberg, former Dean of the Biomedical Engineering faculty of the Technion - Israel Institute of Technology. Aleph Farms is backed by some of the world's most innovative food producers, such as Cargill, Migros, and the Strauss Group.The company has recently received top accolades for its contribution to the global sustainability movement from the World Economic Forum, UNESCO, Netexplo Forum and EIT Food. Aleph Farms is part of the FAO's Private Sector Mechanism (PSM).Twitter/LinkedIn/Facebook/Instagram/YouTube/Medium: @AlephFarmsTo learn more about cellular agriculture and cultivated meat, visit: https://www.whatiscultivatedmeat.com/For media inquiries, please contact: