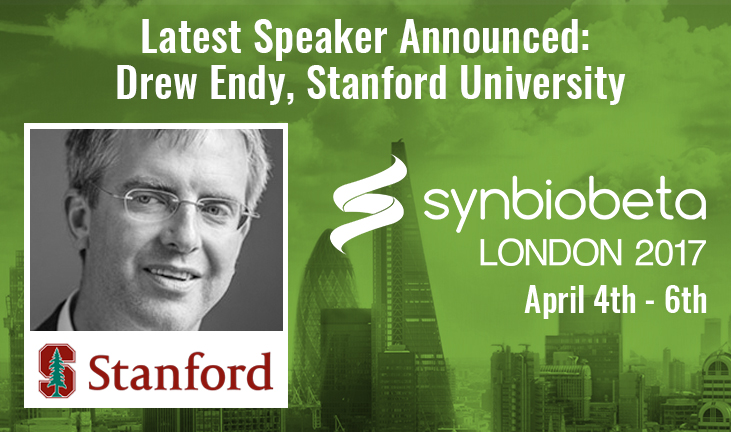 One of the first names you come across when you dive into the world of synthetic biology is Drew Endy. His early foundational work in synthetic biology is clear: this Stanford Professor not only developed the world’s first “fabless” engineering teaching lab at the University and helped start the Biological Engineering major at MIT, he also happens to be one of the founders of the BioBricks Foundation – arguably one of the biggest enablers for engineering biology of the latest years.On 2008, he was named as one of the 75 most influential people of the 21st century by Esquire, where he was tagged as “creator of synthetic life.” He also co-organized iGEM, the International Genetically Engineered Machines competition, the BIOFAB International Open Facility Advancing Biotechnology, and the recently acquired Gen9, Inc, which is now part of fellow MIT Researcher Tom Knight’s Ginkgo Bioworks. And somehow, he has cleared enough time in his schedule to deliver a keynote speech at this upcoming SynBioBeta London.This won’t be Endy’s first time at one of SynBioBeta’s events. Attendants of last year’s SynBioBeta San Francisco had the pleasure of attending a fireside chat with the Professor, where he spoke of the future role and culture of biology in a Fireside Chat session along with Stewart Brand, Co-Founder of Global Business Network. He was also recognized with the Global Innovation Award as part of the 2nd Annual Engineering Biology Awards delivered during the conference, as a token of appreciation for his work in shaping the landscape of the synbio industry.Endy is known for his work and interest in the realms of biological complexity and systems hierarchy. He was recently quoted by Science Daily regarding latest finds on possible start codon amounts – a study by the National Institute of Standards and Technology (NIST) and Stanford University, where the existence of 47 possible start codons was demonstrated, a considerable leap from the previous 7 out of 64 assumed to be able to trigger protein synthesis."We want to know everything going on inside cells so that we can fully understand life at a molecular scale and have a better chance of partnering with biology to flourish together," states Endy in the article. "We thought we knew the rules, but it turns out there's a whole other level we need to learn about. The grammar of DNA might be even more sophisticated than we imagined."But the synbio pioneer’s engagement in the subject isn’t limited to the technical and purely scientific aspects of it. Very recently he was featured in the Washington Post in relation to the design of a full synthetic eukaryotic genome based on Saccharomyces cerevisiae and dubbed Sc2.0. “By rebuilding chromosomes, these teams are showing that biology can be remade such that it is easier to measure, model and manipulate,” said Endy to the Post. “They’re talking about making real the capacity to make the thing that defines humanity — the human genome.”Described as reflective and engaged in the societal aspects of the field, Endy is a recognized advocate for the dialogue and openness of engineering biology, and has engaged in conversation regarding the discipline’s risks as well as its potential gains, with special attention on how those are expressed and distributed to society.“In a world where human reproduction has already become a competitive marketplace it is easy to make up far stranger uses of human genome synthesis capacities. Would it be OK, for example, to sequence and then synthesise Einstein’s genome? If so how many Einstein genomes should be made and installed in cells, and who would get to make them?” he stated last year on an essay co-authored with Laurie Zoloth, a bioethicist at Northwestern University, prompted by the slightly controversial private gathering last year at Harvard regarding human genome synthesis. Drew and Zoloth advocate for open doors that can invite better and more profound discussions, with a poignant reminder that should always stay in the back of every scientist’s mind: “Just because something becomes possible, how should we approach determining if it is ethical to pursue?”There are many sides to synthetic biology, and Drew Endy is a great example on how to engage, nourish and build them all. What reflections will he invite in his upcoming keynote speech? What future will his words paint regarding our science and its effect on society? Be sure to hear it from Endy himself on SynBioBeta London this coming April.