From Chaos, Discovery: How LabGenius is Reinventing Randomness 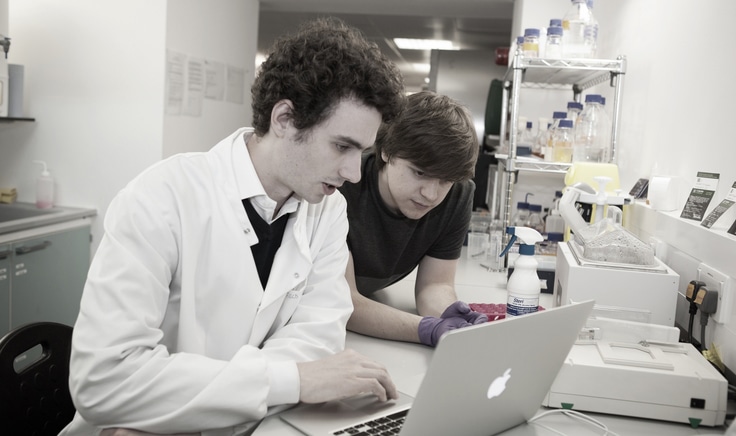 From Chaos, Discovery: How LabGenius is Reinventing Randomness

It is a little known fact that randomness, chaos, if you’d prefer, is an essential part of many modern systems. This is not a reference to one of the greatest 90s movies ever made, but rather a reflection of the fact that random numbers and randomised combinations provide the basis for subjects as diverse as cryptography, poker and drug design.As a synthetic biology site we are naturally interested in the biotechnology side of this, and randomness in the biotech field is primarily found in randomised DNA libraries. These libraries contain many millions of copies of DNA, each of which contains a sequence of variable, randomised DNA. These can then be transformed into host cells to create a highly parallel experiment – researchers can test multiple designs and isolate the best-performing.

LabGenius, a London-based firm, is looking to improve upon this randomness.

More specifically, they have developed technology to define where in the DNA sequence, exactly, the randomness should occur. Traditionally randomised libraries were created by chemical mutagenesis, which led to scattering of changes over the entire sequence. By contrast, LabGenius’ synthetic biology approach allows regions of randomisation within the sequence to be specified, even to the extent of choosing what bases to be randomised between. This allows for unprecedented control over the sequences produced – and ordered chaos, as it were. From this ordered chaos it is then possible to develop alternate antibody binding specificities, optimise proteins folding efficiency, or develop functional DNA.LabGenius was founded in 2012 by James Field, Paul Freemont, and Richard Kitney. Support from both the UK government and private investment helped them to develop and commercialise their synthetic library design technology – technology which is now being used by a number of customers. We were lucky enough to grab an interview with Dr James Field, CEO and founder of LabGenius, whose success so far is built upon his significant experience in the synthetic biology field (as both participant and advisor in iGEM, a fellow in the Synthetic Biology LEAP program, and receiving a PhD in protein-nanocage engineering).

Personally, what brought you into this field? Was it a decisive moment or a gradual process?

I originally got into synthetic biology via the educational pipeline that has been set up by the Centre for Synthetic Biology and Innovation at Imperial College. This allowed me to receive a formal training in synthetic biology at the undergraduate, masters and PhD level. I have always wanted to build a company from scratch so after finishing my PhD, I founded LabGenius with help from SynbiCITE, the UK’s industrial translation engine for synthetic biology.

Is there such a thing as a typical day for you?

Typical days are few and far between! One moment I might be working on a library design algorithm and the next I could be in an investor meeting, presenting at a conference or in a discussion with new customers. The learning curve is certainly steep but that’s what keeps things exciting!

So, tell us a bit about the work your company does.

LabGenius is a UK-based gene synthesis company specialising in the manufacture of synthetic DNA libraries. Our technology sets us apart in that it allows us to build high-quality DNA libraries with minimal design constraints. Our libraries are most commonly used for protein engineering, expression optimisation and in the development of functional nucleic acids.

Have you any announcements you’d like our readers to be aware of?

We recently held a competition in which entrants from academia and not-for-profit organisations were asked to explore the power of DNA libraries. At SynBioBeta we will be announcing the winner who will receive $10,000 worth of DNA libraries!

What are your long-term development goals? Where do you see the organisation in 5-10 years?

To design a new biological system using a library, you have to take a fundamentally different approach to how you might design an everyday object. Typically, everyday objects are designed by generating as many ideas as possible, selecting the best one, making it, then testing it. This ‘design, build, test’ process is repeated, with the results of the test informing the design for the next round. If everyday objects were made using a library method, rather than feeding just one idea into the ‘design, build, test’ cycle at a time, all ideas would be simultaneously made and then tested in parallel. Evidently, this could be immensely powerful.Many of our customers are incredibly excited about the potential of engineering biological systems using synthetic DNA libraries but they don’t have the software tools to rationally design 1012 unique variants. One of our goals is the development of a software suite that makes robust library design simple and intuitive.

What do you think will be the next ‘big thing’ in bio-production?

Engineering new biological systems has historically been seen as a slow and tedious process. An explosion in both the number and sophistication of synthetic biology service providers has turned that axiom on its head. By leveraging automation and outsourcing, companies are now developing new bio-based products at an unprecedented rate. I can only see this trend continuing.James Field will be talking about his experiences in Session 2 of SynBioBeta SF 2015, November 4th - 6th, we’re looking forward to seeing him there!