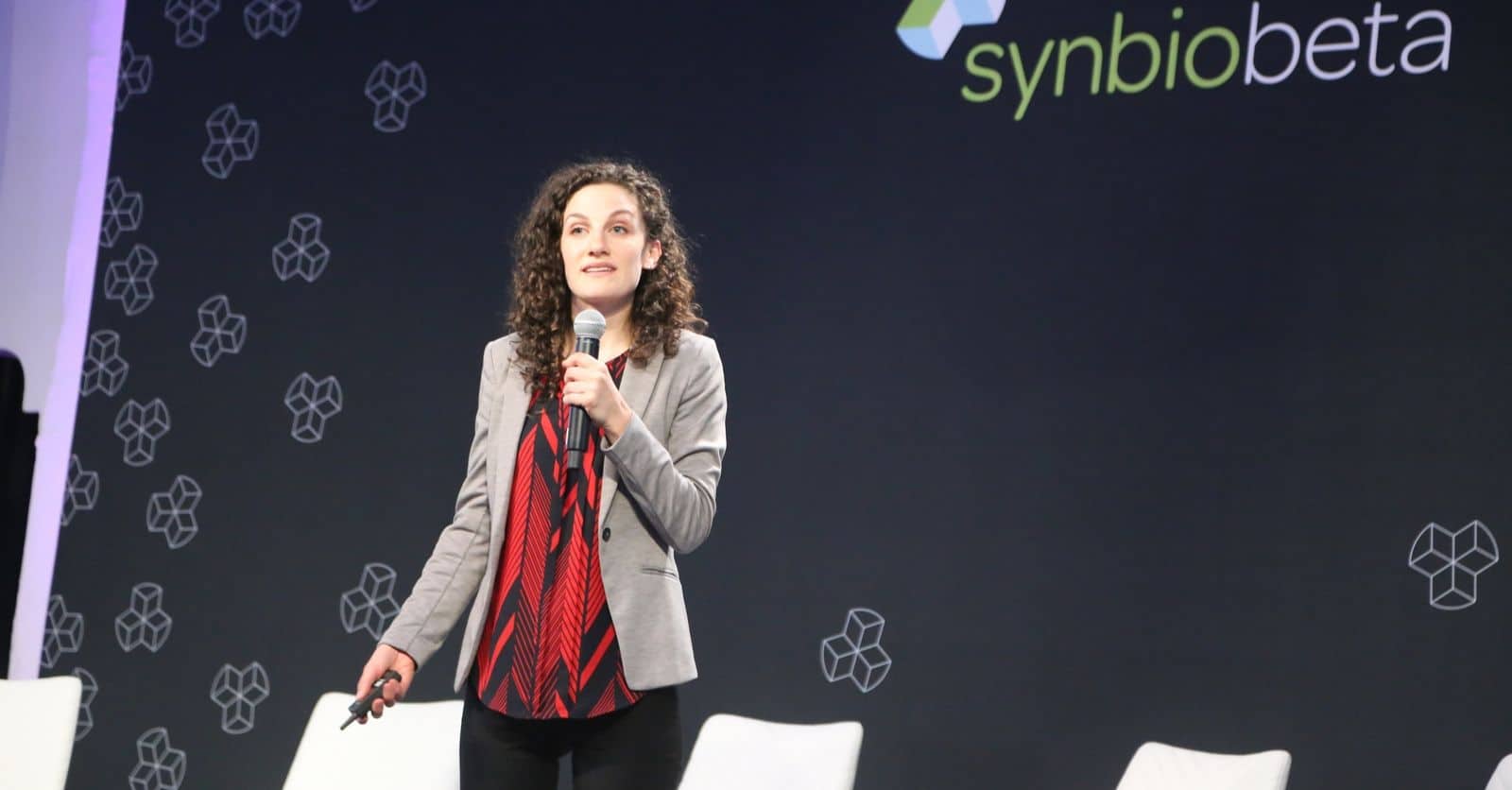 SynBioBeta 2019 featured a program of lightning talks that highlighted the lightning-quick pace of innovation in synthetic biology. Spanning everything from digital noses to plug-and-play robotic labs, these presentations offered a sneak peek into the future of bioengineering. Stephanie Michelson of SynBioBeta hosted the event.First up, Troy Lionberger of Berkeley Lights showed how his company’s Beacon optofluidic platform accelerates the process of screening living cells, shortening the cell-selection process from months to mere days. Beacon makes it fast and straightforward to analyze cells and clones, assay cell cultures, and capture data graphically. The Beacon platform can even track and assay the same individual cell across multiple time points to reveal richly detailed “fingerprints” of cells and clones.

Troy Lionberger, Berkeley LightsDr. Lionberger announced that Berkeley Lights has entered into a $150 million collaboration with Ginkgo Bioworks aimed at accelerating the development of cell-based products for a broad range of markets beyond biopharmaceuticals, including flavors and fragrances.Next up, Will Wright of the iGEM Foundation highlighted the leading role that the annual iGEM competition has played in advancing the field of synthetic biology. Since 2004, iGEM has brought together teams of students to tackle real-world problems using synthetic biology. In the process, these young researchers have learned the fundraising, organizational and problem-solving skills needed to turn ideas into viable products. In the past decade, more than 150 iGEM-based ventures have raised in excess of $1.8 billion of total funding.Aromyx CEO Josh Silverman explained how his company is digitizing the world of smell. Humans can distinguish more than 1 trillion odors, but our ability to measure and record scents has always been limited because it relies on human testers and subjective observations. Aromyx has addressed this problem by cloning the 400 different types of human olfactory sense receptors. It then quantitatively measures their responses to sample odors and uses AI to map the resultant landscape. Early applications include food and beverage, pharmaceuticals and plastics. Aromyx is currently raising a Series A round to execute on this strong customer demand.Robert McBride, co-founder of seed-stage company Felix Biotechnology, emphasized the urgent need for medicines that target antibiotic-resistant bacterial infections. A study commissioned by the British government projects that by 2050 more people could die from antibiotic-resistant “superbugs” than from cancer. San Francisco-based Felix Biotechnology, in collaboration with researchers from Yale University and UC Berkeley, is developing tools to accelerate development and deployment of bacteriophage therapies targeting these infections.Laura Whitman, Senior Global Product Manager at Agilent Technologies, outlined Agilent’s broad range of synthetic biology products and services. Reflecting its commitment to leading-edge technologies, Agilent reinvests about 8 percent of its revenue into research and development, and it also partners with startup companies. Agilent offers a full line of biological reagents including DNA and RNA oligos, sgRNA, and CRISPR libraries.Next up, Paradromics founder and CEO, Matt Angle, described his company’s mission to build a high-capacity brain computer interface that will turn some of today’s most intractable physical and mental health challenges into data problems. The nickel-sized device, currently in preclinical development, can be implanted in the human brain, where it interfaces with specialized digital prosthetics to treat conditions ranging from blindness to schizophrenia. The Paradromics device needs FDA approval, but Angle expects to launch the company’s first product in 2025. He notes that the key technologies, such as sensory and motor prosthetics, are already in place.

Matt Angle, ParadromicsMaia Smith of AbCellera explained how the Vancouver-based startup combines microfluidics, next-generation DNA sequencing, and machine learning to accelerate antibody discovery. Antibodies are the fastest growing class of drugs to treat indications like cancer, arthritis, pain and infections. When an antibody binds to a pathogen, the immune system drives a rapid evolutionary process of mutation and selection that creates highly optimized antibodies. AbCellera’s Celium platform allows for analysis of antibody responses more than 10x faster and 100x deeper than current methods, while providing detailed information on the sequence and properties of each antibody. The platform helps leading pharmaceutical companies generate large numbers of high-quality antibodies along with the data needed to predict which ones are suitable for development.Next up, Kristin Ellis, Director of Strategic Initiatives at Brooklyn-based Opentrons, debunked the notion that lab automation is inherently complicated, expensive and dependent on proprietary technologies. The Opentrons OT-2 pipetting robot, for instance, costs about $5000 and uses an open-source API for plug-and-play simplicity. Developed in close cooperation with industry-leading “co-developers” including Dr. Geoff Baldwin of Imperial College London, Boston University’s DAMP Lab, and the BioBricks Foundation, the OT-2 easily handles repetitive liquid handling tasks. In addition, Opentrons recently launched the world’s most affordable fully automated thermocycler, bringing end-to-end PCR based workflow automation to biologists everywhere.Linda Molnar of the National Science Foundation highlighted the ongoing efforts by America’s Seed Fund to support high-impact, high-risk technology startups. The fund awards 400 grants every year, totaling $200 million, to startups and small businesses that the NSF hopes will be commercially successful and have a positive impact on society. The fund takes no equity, and recipients retain full control over their teams, their intellectual property, and the direction of their work. America’s Seed Fund provided initial funding to numerous high-profile startups including Ginkgo Bioworks, Lygos, Novome Biotechnologies, and Living Ink Technologies. Dr. Molnar concluded by emphasizing the societal benefit of circular economies in a world whose population is projected to reach 8.4 billion by 2030.

Linda Molnar, National Science FoundationNext, Reed Molbak of Benchling explained how his company’s cloud platform accelerates life science R&D by bringing all experimental data and workflows together in a unified system. Historically life science data has been created and stored in a patchwork of locations, and PhD researchers spent valuable time gathering the information they needed. Since launching in 2012, Benchling has grown to become the most widely adopted life science R&D cloud software, used by over 170,000 scientists worldwide. These researchers depend on Benchling’s suite of cloud applications to design DNA, collaborate on experiments, manage research workflows and make critical R&D decisions.2019 is shaping up to be another record year for synthetic biology investment. And as these lightning talks showed, the pace of innovation is accelerating as today’s technologies become the building blocks for tomorrow’s breakthroughs.