How biomanufacturing can make living on Mars a reality 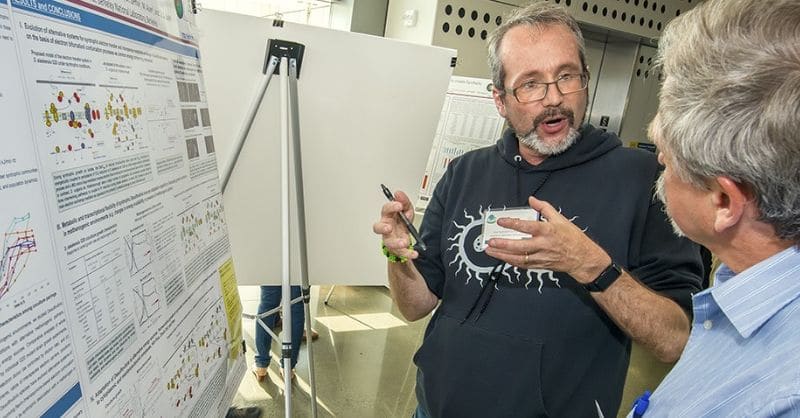 How biomanufacturing can make living on Mars a reality

The wheels are in motion to send the first humans to Mars. For many, the first image that calls to mind may be of a spaceship touching down in a vast, red desert. But arriving on Mars is only half the picture. People also need to live there, something that can be difficult to imagine because there are so many unknowns. Martian habitation presents one of the greatest scientific challenges of the 21st century. And it is a challenge synthetic biology will be integral in solving.One of the most exciting ventures tackling this problem is CUBES, the Center for the Utilization of Biological Engineering in Space. SynBioBeta recently spoke with Adam Arkin, the director of CUBES and professor of bioengineering at UC Berkeley. Arkin, who will also speak at SynBioBeta 2019, described the goals of the CUBES project and how their work could enable human life on Mars.CUBES is a five-year NASA Science Technology Research Institute. Veteran researchers, postdocs, and undergraduates have come together across six universities to develop biomanufacturing systems for Mars missions. But, explains Arkin, “since there isn’t a specified reference mission architecture for a real mission to Mars, we don’t know precisely what our constraints are.” Over the next five years, CUBES will build increasingly realistic models of what it will take to make integrated bio-systems feasible in space.

Image courtesy of CUBES. NASA was instrumental in establishing CUBES and the project is continuing forward in communication with the agency. Arkin says this close working relationship is a huge privilege for the CUBES team as they work to understand what a Mars mission plan will look like.

These systems will rely heavily on Mars’ scant in situ resources. “The idea is to be able to produce food, pharmaceuticals, and light building materials using waste recycling and the resources that are already there,” says Arkin. Using on-planet resources addresses a two-fold problem. It reduces the amount of mass needed to be shipped from Earth and it decreases the risk that a surprisingly critical item gets left out. Some things always make the proverbial suitcase; you really can’t leave Earth without a spacesuit. But what about medicine? Mars is an extremely harsh environment. Humans will need a whole host of medications to stay healthy. Though we have a very good idea of we will need, there is still plenty of room for the unexpected. If something goes wrong, the nearest pharmacy is an average 140 million miles away. CUBES is tackling this particular problem through functional food.The concept of functional food is not new. It typically involves engineering food to provide the body with more benefits than just fuel. Any Mars mission must grow its own food no matter what (Indeed, one of CUBES’s projects is transforming Martian regolith into agricultural soil). So why not get plants to work two jobs at once and produce the meds that Mars residents will need?Arkin strongly credits Karen McDonald, chemical engineer at UC Davis and upcoming SynBioBeta 2019 speaker, for spearheading the effort to produce biopharmaceuticals in plants. As biofactories, plants have certain advantages over bacteria. For one, plants are better at making complex proteins. They can also grow drugs stably without a lot of specialized equipment. “You don’t need a big bioreactor with CHO cells,” says Arkin. “Just take a lettuce leaf and a gene gun, shoot the construct into the leaf and it’ll make in a fairly controlled way. Once the drugs come to maturity, they can be isolated from the plant or “you could just eat the damn plant,” Arkin chuckles.Space travel is all about efficiency. Any system that goes into space needs to be low energy, essentially zero-waste, and easily run by just a few people. Nutrition, biofuels, 3D printed biopolymer—one system’s waste is another one’s energy source. “You’re taking input from one group and giving your output to the next,” explains Arkin. Achieving this kind of closed loop is difficult in its own right. But Arkin points out another challenge; getting academics to also function as an integrated whole.

There are four divisions within CUBES: Microbial Media and Feedstocks, Biofuel and Biomaterial Manufacturing, Food and Pharmaceutical Synthesis, and Systems Design and Integration. To achieve closed-loop biomanufacturing, researchers must account for every watt of energy, gram of material, and hour of astronaut labor used between the divisions. This kind of holistic thinking does not come naturally to academics. As director, one of Arkin’s biggest challenges is fostering this mentality. “I think that, in general, academics have a hard time with this because this doesn’t get you the science papers,” says Arkin. CUBES isn’t about the big, individual breakthrough. Instead, he says, it’s about the nitty-gritty details hammered out through cooperation, collaboration, and communication. For Arkin, this kind of community build is inspiring. It’s an emblem of the work at NASA and now at CUBES.CUBES initially came to life when Amor Menezes, then a postdoc with Arkin and now at the University of Florida, brought Arkin’s attention to the potential impact of controlled cellular engineering in space. Menezes, who will also speak at SynBioBeta 2019, and Arkin, eventually teamed up with SynBioBeta CEO John Cumbers, among others, to explore how biology could benefit space travel. But as with many space-related innovations, astronauts don’t have to be the only ones who benefit. Many of CUBES’s projects could have tremendous impact on our home world.

Space science: not just for space

As Earth’s population climbs and resources dwindle, biopharmaceuticals, advanced hydroponics, and bioengineered crops are urgently needed in addressing our growing crisis. But the focus in developing these technologies is often aimed towards the stars. The dire needs of the present are often overlooked for the exciting opportunities of the future. Arkin points out, however, that the aspirational aspect of space travel is a strong force in driving innovation.

I think space travel has always been about overcoming the limitations humankind has. We want to go beyond where we have gone before, and it provides a necessity which breeds invention.

The CUBES mission will be complete in five years. If all goes well, the result will be a fully integrated Martian bio-system. No, the system won’t be headed to Mars on the next flight out. But ideally, it could be tested on a lunar station. After all, with private companies in this new space age, “it may be that the moon is in an Amazon delivery neighborhood,” jokes Arkin. But there is more to CUBES than building practicable models or even developing novel technologies. At its heart, CUBES is also about inspiring the next generation.Many of the CUBES team are students, just beginning their scientific careers. “There are moments in time in human development when people can be really inspired,” says Arkin. “Some of the best moments are when people are just entering or just exiting college and they can see all that potential laid out in front of them.” For Arkin, it’s not just the science at CUBES that will build the future, it’s the integrated community of people who are making it possible.Adam Arkin is speaking in a new BetaSpace session at SynBioBeta 2019 October 1-3 in San Francisco. Register today to hear from him and others in the community working to make space settlement a reality.