How to support women in synthetic biology 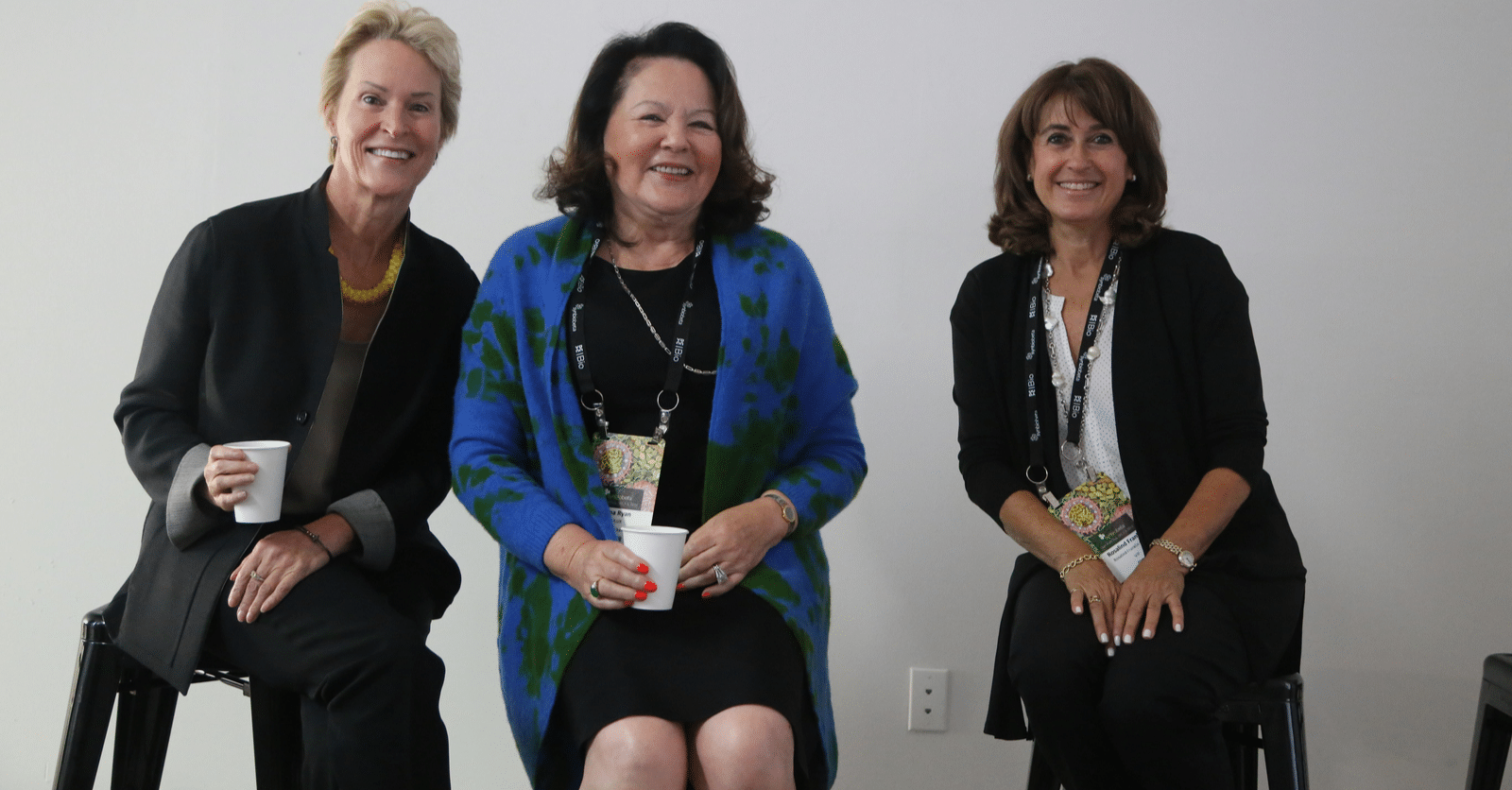 How to support women in synthetic biology

SynBioBeta 2019 was, as promised, the biggest and best SynBioBeta conference yet. It might seem difficult to identify speakers or sessions that stood out above the rest with a schedule featuring the likes of George Church and Eric Schmidt and groundbreaking announcements from Inscripta and even the White House. But on Day 2 of the conference, law firm Mintz brought us a very special lunch panel. I might be biased, but to me this was one of the best sessions of the conference.Open to women only, the lunch saw over 40 attendees. While we came from a range of backgrounds -- scientists and non-scientists alike -- we all had one thing in common: a desire to fix the problem of lacking female leadership in synthetic biology (and in all fields, really). Moderated by Mintz’s own Terri Shieh-Newton, the panel featured three extraordinary women with backgrounds as diverse as the audience: 2018 Nobel Prize Laureate Frances Arnold, investor Una Ryan, and Rosalind Franklin’s (yes, the Rosalind Franklin) niece, who works as a consultant for nonprofits. Each brought a fresh perspective to a critical problem.https://youtu.be/xDFqHmtGb1U

The foundations of synthetic biology

After short introductions, Shieh-Newton jumped right in with the first question: “How has synthetic biology evolved, and where is it going?” Arnold and Ryan had the most to say about this topic, as both had been around “since the beginning, but we didn’t call it synthetic biology.” And while Arnold focused on the exciting new real-world applications that have taken off since synthetic biology began to boom, Ryan focused on a more sobering but no less important issue: ethicism.(Ethicism is simply the idea that ethics and ethical ideas are valid and important. Science -- and synthetic biology, more specifically -- ignores the moral norms that govern the community’s behavior to its own detriment.)“It’s really become a culture. The thing that concerns me … is I can see a way that AI could come up with an algorithm for ethicism. Biology itself has such wonderful control and feedback loops. But what we’ve done with modern medicine and synthetic biology is overcome constraints, and we no longer worry about having the perfect DNA for our species to go on. We have to be very, very careful and sensible and thoughtful to think about the regulations and laws that govern our direction,” she said.Franklin agreed, but added a different angle: “The message I want to get , is how we want to behave and how we are with each other, and how we treat each other. It's not just society in the very large, huge way that the biology works, it's on the human level as well.”

Where are the women CEOs?

The next topic of discussion was a favorite of the audience, with several audience members contributing to a truly thought-provoking conversation. Why aren’t there more women CEOs, founders, and investors in this space?Ryan spoke first, directly harkening back to Franklin’s recent words: we need to be kind to one another and help one another. Arnold chimed in, emphasizing that the problem isn’t that women aren’t capable, it’s just that it’s always been men, so we need to get the word out that starting and running companies is great, and that women can do it, too.“I don’t see women failing any more frequently than men do,” she said, then turning the question back onto the audience. “Do you feel that women pay a higher price for failure? Do you feel that women don't want to fail? You're the ones who are doing it, we're just up here talking about it.”She didn’t have to ask twice. An incredible conversation followed as suddenly the audience turned into the panel. A now-consistent theme, the topic of kindness, support, and mentorship surfaced as critical -- and the audience agreed that this is a group effort. We all need to help one another and support one another. “You don’t have to be an official coach or mentor to support women,” said Franklin, encouraging and motivating the audience. She then spoke up with an inspiring example from her aunt’s life:“Women feel they have to have much more knowledge than men do, men will take a job with 20% of knowledge and women will wait until they have 80% to even apply. A part of that is how we bring ourselves to it … I think it’s really owning the fact that you can. just did her thing. She didn’t think there was anything strange about being capable and accomplished and unapologetic.”

The natural question resulting from this conversation, of course, was how can we be champions for others? As one audience member reminded us, women can often bully women more than men do -- especially when they feel the spaces for women are limited.For Ryan, the answer was simple: make it a part of your everyday life. When you go to the dentist, for example, choose a woman dentist. Even better, choose an African American woman dentist. But one audience member called us to educate ourselves about implicit bias: the unconscious bias that we -- including women -- have against women, referencing a rigorous study done by the NAS on this topic.“In the investment community, this is very true,” added another audience member. “The reason 2 to 3% of women founders are funded is because of implicit bias. It's not that they don't have the experience, it's not that they can't put the team together, it's not that they can't execute, it's that they can't get the capital -- and they can't get the capital because people tend to invest in people who are most like them, who they feel comfortable with,” she said. Unfortunately, in our field (as well as many others) the majority of investors aren’t women, especially not women of color.So how do we counter it?“Success speaks,” said Arnold. “Get out there and tell your story, and tell it well. I had to do that for my career. There were plenty of roadblocks along the way. But I don't suffer from that gene of needing to please people. That's one thing I suggest that we try to get rid of -- that constant desire to make everyone happy is the biggest single roadblock to success.”An audience member then brought scientific approach to the issue, recommending a book that presents practical, data-driven scientific approaches for how to design your life and do things in your life to cause other peoples’ behavior to change. Christine Gould, also in attendance, discussed how she has “played the game” in the past, signing her name “Chris” instead of “Christine” when trying to get meetings with investors -- a tactic that sadly was successful. Get men to be a part of the conversation, too, recommended another audience member. But again, the focus turned to supporting one another.“I for one, am pretty competitive, and I’ve been a little bit successful,” admitted Arnold, eliciting lighthearted laughter from the audience. “All of my science is done by teams. I learned early on that by hiring women -- not just the top women, the women who help other people -- there’s real value there. we are hyper competitive with the rest of the world, but inside everyone feels like nobody's going to steal their ideas, they go to somebody with a bad idea and come back with a better idea. They can help each other with learning things, and it works beautifully.”The audience loved this, empowered and enthused by the collective support found in that room at that moment. “There’s a lot of firepower in this room!” shouted one.Then Ryan spoke up, suggesting that as a group we create a SynBioBeta fund specifically designed to support women leaders. She was met with enthusiastic applause.

And with that, our hour was up and it was time to mingle with old and new friends, mentors, and supporters alike. But before we did that, Franklin left us with one last thought:“We have to set every day with the intention that we’re going to work together. checking in with ourselves, what are we doing, and being kind. Sometimes when we're busy, and we get caught up in what we're all trying to accomplish, that kind of goes out the window. I mean, start with a smile -- you walk down the street and see someone that smiles, the first thing you do is connect. So it's silly things … but if we changed just little things, then there's a cascade effect.”I can’t wait to see where that cascade effect has brought us one year from now.