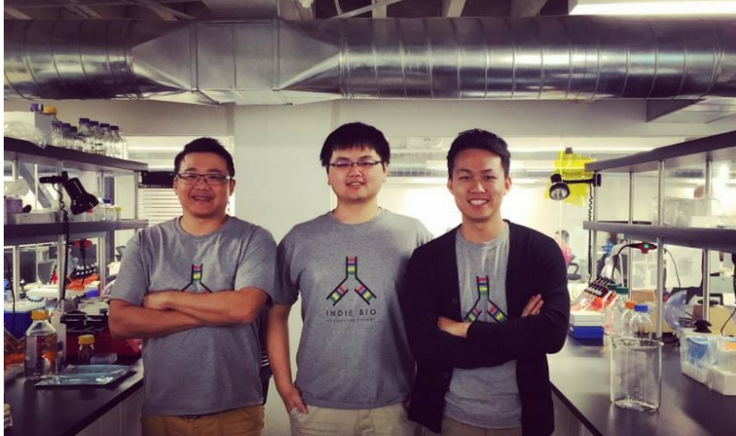 Did the first part of IndieBio’s latest batch leave you wanting to know more? Here are the remaining seven teams that form the accelerator’s Class of 2016-2017. Remember to check out their Demo Day on February 9th!

According to the American Cancer Society, the estimate of new cases of cancer for 2017 is 1,688,780 in the US alone. Out of them, more than 600,000 are expected to die. At the same time, more than 18,000 cancer treatments are currently in trials, but that doesn’t assure that the patients that fit those trials are aware of their existence. Cancer treatments today, sadly, are based on what the oncologist happens to know from research and patient data – not on the combined power of all cutting edge treatments being developed.Karim Galil, founder of Mendel Health, wants to match every patient to their ideal cancer treatment.“One of my friends lost her 30-year old brother to brain cancer,” says Galil. “A week later, we found a clinical trial, very close to his hospital, that matched the genetic makeup of his cancer and had a potential to save his life. As a physician, I have lost many patients just because I didn't know what is already known, including family members.”The strength behind this statement is mirrored in Mendel’s promise. The company’s trial matching system continuously updates the user’s matches – based on previous medical records shared by the user and collected by the platform itself – allowing the user to enroll in a matching trial with the click of a button. This way, Mendel’s AI can make sure that patients today are able to make the most out of treatments developed today, and not decades ago. It also ensures that patients have access to all the existing treatments, and not just the ones known by their doctor. The platform even helps users through a concierge system so that they can sequence their DNA and perfect their match according to their cancer’s own genetic make-up: it’s tailor-made oncology, all made possible through medical AI.“People shouldn’t die because we as physicians don't know all what there is to know.” States Galil. “AI augmenting a physician's decision making will stop needless mistakes and deaths.”

Scared of snakes? Maybe you should be. According to The Telegraph, snakes kill more than 90,000 people a year around the world. It is estimated that between 1.2 million and 5.5 million snake bites may occur per year, and out of those a quarter result in injection of poison into the bloodstream. The mortality rate maybe wouldn’t be terrifying if you don’t consider that only 8.5% of snake bite victims in Nigeria and 27% in Kenya sought hospital treatment – the lack of better systems for handling snake bites and the availability of antivenom playing a key role in this.Venomyx is developing Vipax™: a universal, safe, effective, portable and scalable snake antivenom created using recombinant antibody fragments against clinically significant toxins in venom. The company is committed to developing next generation anti venom that is safe, effective and available around the world. The company aims to move from old-fashioned antivenom production methods to the 21st century, switching from milking venom from snakes and injecting it to a horse until it builds immunity to custom-made anti venom that is specific and has no side effects, unlike the current ones.The antivenom is already showing early preclinical success as a universal treatment for snakebite. “It is a recombinant product that has the distinct advantage of being manufactured at scale using microbial fermentation which makes the resulting product reliable and cost effective,” writes founder Daniel Dempsey. “The stability of our antivenom means that it does not require cold chain and will be available in the field for the first time ever!”

What began as a citizen science study of cat microbiome has now evolved into a full-blown company. AnimalBiome is a microbiome testing service that seeks to help the monitoring and treatment of chronic health conditions in animals. More than 8 million cats and dogs in the US suffer from chronic digestive disorders, and the company wants to both provide gut microbiome assessment kits and develop therapies. “With this dual approach to gut health,” says co-founder Adrien Burch, “we hope that pet owners will not only be able to treat their sick pets, but tackle issues before they start.”The company was spawned out of what was once the “Kitty biome project”. The main idea behind it was to map the feline microbiome in order to find insights regarding how different cats are affected by things like diet, exercise, being outdoors or indoors, medical treatment, among others. The offer made through their Kickstarter campaign in May 2015 sent backers a kit and a set of questions so that the user would send back test samples (read: cat poop). The bacterial taxa present in said samples was identified by sequencing the V4 region of 16S rRNA. The results were later shared with the users, so that they could see the specifics of their cat biome and how it compared to others.For Burch, even though the project had already raised funding through Kickstarter, being a part of IndieBio has been a great springboard for them as a company. “The IndieBio program precipitated my choice to leave my job in academia and take a risk on something I am passionate about: animal health.”

Steve Kazemi, CEO of Pure Cultures, spent almost 20 years manufacturing probiotics for humans when he recognized there was a lack of new product development and innovation in the probiotics industry. Pure Cultures first created a research and fermentation facility to develop new probiotic strains, but while doing so, Kazemi discovered the antimicrobial power of certain strains, changing the focus for Pure Cultures into these new proprietary strains and processes.The company has developed several products for use in livestock as antibiotics replacement, and also as functional feed for gut health enhancing in both livestock and companion animals. Pure Cultures has even gone into pet food, creating a product that can be used as an ingredient to combat foodborne pathogens. This could also have several applications regarding food processing and rendering.Pure Cultures also provides contract manufacturing, enabling customers to access small, custom fermentation runs, even of difficult-to-grow strains. They even partner with their clients from idea to commercialization, broadening their development spectrum significantly.

Vivian Qu, Founder of ViaeX[/caption]ViaeX creates biological nanofiltration systems for water and air. With their proprietary membranes, materials and manufacturing processes, the company wants to reimagine filtration and use it to address some of the world’s greatest challenges, such as pollution, accessible clean air and water, global warming and clean energy.ViaeX’s systems are biodegradable, low cost and rapidly scalable, enabling industries to act environmentally friendly while improving their profitability. Unlike traditional nanomaterials, ViaeX’s membranes maximize surface area to control the targeting of pollutants. Each layer of their biomimetic-nanomaterial platform is synthesized with various functions in mind for selective target reaction, this way the platform can have molecular hooks that are able to capture, absorb and neutralize pollutants.This is achieved by decreasing the diameter of their base fibers, chemically activating their materials, and using intrinsic material advantages, such as the natural antimicrobial power of their base polysaccharide. The company expects this material can be applied in areas as diverse as water filtration, both for public water supply and industrial water treatment, air purification, composition control, enhanced garments and anti-bacterial bandages and wraps.

They say there is an app for everything, but did you know there’s an app for rehab? That’s DxRx Medical’s promise.DxRx Medical is treating early stage alcohol addiction through telemedicine and behavior modification. Their mobile solution helps users measure and cut back on alcohol use, monitoring each user so that their counselors can be there when needed. And just how effective can a system like this be? Founder David Deacon says: “The results speak for themselves: our average patient cuts drinking by more than half in the first month.”Out of an estimate of 34 million US Americans that would likely get a diagnosis of “alcohol use disorder” if they told their drinking habits to a doctor, only 2.5 can get treatment with the current available options. The company states that treatment should be available to everyone wishing to reduce their alcohol consumption – either for medical, social or aesthetic reasons – and already has their service working in California, with plans to roll out nationally beginning next year. Chief Medical Officer and Cofounder Dr. John E. Mendelson said: “Alcohol is everywhere but most locations do not have an appropriately trained physician. I have treated addiction successfully for decades at my little office in San Francisco. It is so gratifying now that I can reach out over the web and provide effective treatment to 40 million people in every corner of California.”

Bioinspira created a versatile sensor platform: a biomaterial-based sensor network that the company wants to use to detect airborne chemicals remotely and in real time, with a large number of applications for many industries.“After our first target market of natural gas industry, we are looking to develop a super sensor array that can detect more than 50 airborne chemicals simultaneously,” states Ray Chiu, co-founder. “With this super sensor, we can quickly enter any industries and transform modern industry infrastructure by providing interconnected sensor networks for chemical leak detection. There will be no waste generated from the use of Earth’s valuable resources everywhere. Such engineering marvel, if successful, will also provide unprecedented data and insight to everyone, and lead to a safe and smart world.”The company was conceived as co-founders Chiu and Benson Fan’s M. Eng. Capstone project. They were accepted to the CITRIS Foundry at UC Berkeley, where they began operations by developing an inexpensive ammonia sensor for industrial safety, designed both for on-site use and for future network integration. An incredible learning experience, by accounts of Benson Fan in an article published in Medium last year: “I had to change the very way I thought about the project. It was no longer about sharing and showing people how amazing the technology was, but rather about solving an unmet need. Technology was no longer the end, but the means to solve a real life problem.”Remember to check out IndieBio's Demo Day on Feb 9th, or join the livestream to check the incubator’s latest generation.