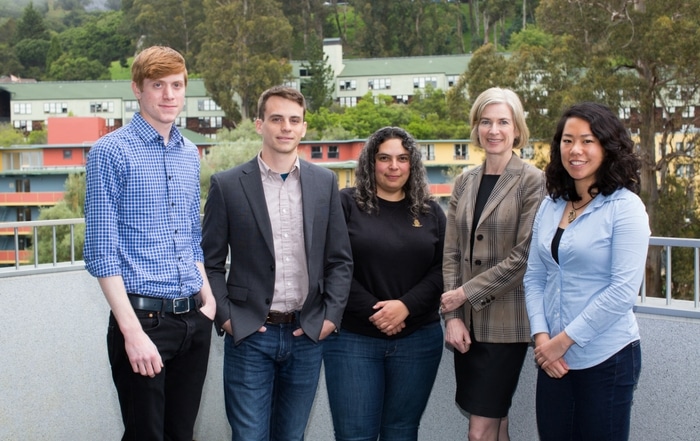 Backed by leading VCs including NFX, Mayfield, 8VC, and AME Cloud, the company aims to make in-home and point-of-care disease detection accessible to everyoneSAN FRANCISCO ​(April 26, 2018) -- Today, Mammoth Biosciences unveils their vision for the world’s first and only CRISPR-enabled platform capable of detecting any biomarker or disease containing DNA or RNA. Using proprietary CRISPR technology licensed exclusively from the University of California, the company aims to democratize disease detection with an easy and affordable point-of-care test that allows fast, simultaneous detection of multiple conditions, in real time, both in the hospital and at home – all in a simple single credit card-sized strip form factor. This pioneering approach has the potential to significantly reduce healthcare spending by replacing the need for dedicated testing devices, while also increasing accessibility and ease-of-use.Here is a video explaining how Mammoth Biosciences’ technology works:

Mammoth is co-founded by Stanford PhDs Trevor Martin, CEO, Ashley Tehranchi, CTO, and Berkeley PhD students Janice Chen and Lucas Harrington, who will head scientific research. Jennifer Doudna, famed CRISPR researcher and co-inventor, is also co-founder and chair of Mammoth’s Scientific Advisory Board and will guide the company’s scientific vision going forward.Mammoth is harnessing the naturally evolved diversity of bacterial CRISPR systems. The technology is poised to make dramatic innovations in many industries, particularly within healthcare, with the spotlight on research in gene editing and therapeutics. In the short-term, the most immediate impact outside of the lab lies in disease detection and biosensing.

Given Mammoth’s scientific pedigree, the company will initially focus on healthcare applications, with the aim of transforming diagnostic testing across the care continuum from hospital and point-of-care settings to at-home testing. Similar to how Apple’s iOS created a democratized platform for developers, Mammoth’s long-term vision is to provide a CRISPR-based platform on which Mammoth and partners can build an infinite number of tests, both within healthcare and also across industries such as agriculture, oil and gas, and forensics. Growth of the platform is powered by Mammoth’s CRISPR protein discovery engine -- technology that is poised to explore and uncover additional Cas systems and reveal an infinite number of future applications.“Imagine a world where you could test for the flu right from your living room and determine the exact strain you’ve been infected with, or rapidly screen for the early warning signs of cancer,” said Trevor Martin, CEO and co-founder of Mammoth. “That’s what we’re aiming to do at Mammoth -- bring affordable testing to everyone. But even beyond healthcare, we’re aiming to build the platform for CRISPR apps and offer the technology across many industries.”

Mammoth’s platform is already capable of detecting any biomarker containing DNA/RNA and the first application the company will explore is in disease detection. This could be as simple as a rapid test on a credit-card sized disposable paper strip that anyone could use at home. The goal is to make it easy, fast, and affordable for physicians in hospitals, at clinics, or even consumers to test multiple diseases, from common infections, to cancer or STDs. For at-home testing, once the user has completed the test, they will securely upload an anonymous photo of the strip to Mammoth’s corresponding application for remote analysis and then receive their confidential results and professional advice - all in under an hour.Mammoth’s platform will fundamentally change the way the medical community and consumers interact with the $45 billion global disease detection market, by bringing the power of versatile DNA/RNA testing to the point-of-care in a scalable and universal platform.“Mammoth’s technology exemplifies some of the most urgent, impactful, and untapped potential in the CRISPR space,” said Jennifer Doudna, co-founder and Chair of Mammoth’s Scientific Advisory Board. “With use cases ranging from individuals to larger healthcare systems, agriculture, mining, and beyond, Mammoth is taking CRISPR out of the lab to create something that is transformative for the general public.”Mammoth is backed by top investors including Mayfield, NFX, 8VC, AME Cloud, Wireframe, Kairos, and Boom Capital, several of whom were involved in building some of the biggest names in health and technology such as Genentech, Amgen, Facebook, Lyft, and Yahoo!.Mammoth is currently reviewing partnership requests from those interested in building on its CRISPR-based platform. To learn more, visit www.mammothbiosci.com

Mammoth Biosciences is a biotech company that has developed the world’s first and only CRISPR-based detection platform capable of sensing any biomarker or disease with DNA/RNA. The company is co-founded by CRISPR pioneer Jennifer Doudna, Stanford PhDs Trevor Martin and Ashley Tehranchi, and Berkeley PhD students Janice Chen and Lucas Harrington. Mammoth is on a mission to leverage the power of CRISPR to democratize disease detection by bringing accurate and affordable testing out of the laboratory and into the point-of-care. The company’s funding was led by top investors and includes Mayfield, NFX, 8VC, AME Cloud, Wireframe, Kairos, and Boom Capital. For more information visit http://www.mammothbiosci.com/Media Contact:Lauren VolkmannVSC for Mammothlv@vscpr.com