Melinda Gates on the promise and peril of biotechnology 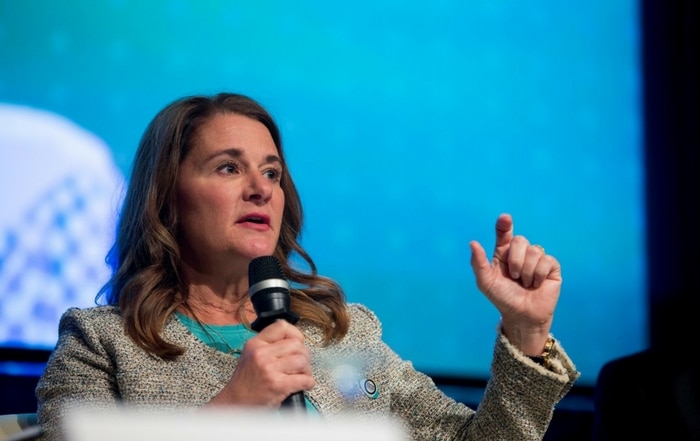 Melinda Gates on the promise and peril of biotechnology

Melinda Gates is an optimist.As co-chair of the largest private philanthropy in the world, she ought to be. The Bill and Melinda Gates Foundation spends billions per year combating the spread of infectious disease around the world. The foundation also supports innovation in agriculture, education, women’s health and more. The couple relies on their optimism — and impatience — to change the world.Gates defends her optimism with data. “Despite the headlines, we see a world that’s getting better,” wrote the couple in their 2018 Annual Letter. “The world is healthier and safer than ever. The number of children who die every year has been cut in half since 1990 and keeps going down.”Melinda Gates recently shared her views — on biotechnology, global health and more — in an interview with Vox.com founder Ezra Klein at the 2018 South By Southwest Conference in Austin, Texas. Direct quotes have been lightly edited for clarity.

Inventing our way out

Melinda Gates believes the most pressing challenges of our time, including climate change and global food security, will require massive innovation.She offered a colorful quote from her friend Warren Buffett, the 87-year-old business magnate who helps bankroll many of the foundation’s initiatives: “Back in the time of the horse and buggy, when we started having cities, you would have thought that we were all going to drown in shit. We invented our way out of that problem.”Gates shared her excitement about ongoing biotech research supported by the foundation. “I sat in a meeting on Thursday where these scientists have hit on something; it looks like in seven years, we won’t have to fertilize anymore. They are figuring out what is it about legumes that does nitrogen fixing in the soil. For the developing world, where most people in Africa are still subsistence farmers, holy smokes. Fertilizer is it in the developing world.”

“If we can genetically modify a cereal crop to fix nitrogen from the atmosphere back into the soil — wow. That’s a game changer.”

Gates emphasized that the developing world will be hit hardest by rising tides and changing weather patterns. To help existing crops thrive on a changing planet, the foundation is also helping to develop drought- and flood-resistant seeds.Agriculture isn’t the only area of biotechnology that excites Melinda Gates. High-resolution geographical modeling of malarial infections is helping to contain the disease, as are simple mosquito-halting bed nets, but the parasite remains pernicious. “Malaria’s been around since the time of the Egyptians,” she notes. The foundation recently announced financial support for a synthetic DNA-based vaccine for malaria. The foundation is also looking into the use of gene drives to control malaria-carrying mosquitoes in Burkina Faso, though no trials are pending.

“We actually have a chance of ending malaria in my lifetime.”

Gates believes the power of innovation manifests as both new outcomes and new opportunities. “When I look at Nairobi, Kenya, and their innovation hubs – they’re creating products that not only serve Kenyans but ten other countries on the continent of Africa. Billionaires are starting to come out to Africa because they have created markets there.”

When asked to articulate what she saw as the biggest threat facing our world in the next decade, Melinda Gates didn’t hesitate: “A bioterrorism event. Definitely.”“Why is that at the top of your list?”, asked Klein.

“A bioterrorist event could spread so quickly, and we are so unprepared for it. Think of the number of people who leave New York City every day and go all over the world — we’re an interconnected world.”

Being prepared, she explained, would mean knowing “what our safety standards are, what to look for, what the reporting network looks like.” Gates believes the world would need to develop “the equivalent of the CDC” just to watch out for bioterrorism events. She said the subject is one she doesn’t like discussing.

It is clear that Melinda Gates recognizes the power of biotechnology. “We are just on the tip of the cusp of where we might go. That’s why the ethical pieces are deeply important,” she said.The nearly hour-long conversation touched on many other topics: women in the technology sector, her experience as a woman at Microsoft, artificial intelligence, meatless-meat (she’s a fan) and more.

“Bill and I often have a fun debate about: If you could live anywhere in the world, where would you want to live? We also say: If you were entering any field now and you had your choice, what field would you go in? He and I both would go into the intersection of biology and computer science. When it comes to that field, we are only at the beginning.”