On the Steps Between Scientist and Founder: An Interview with Fatma Kaplan 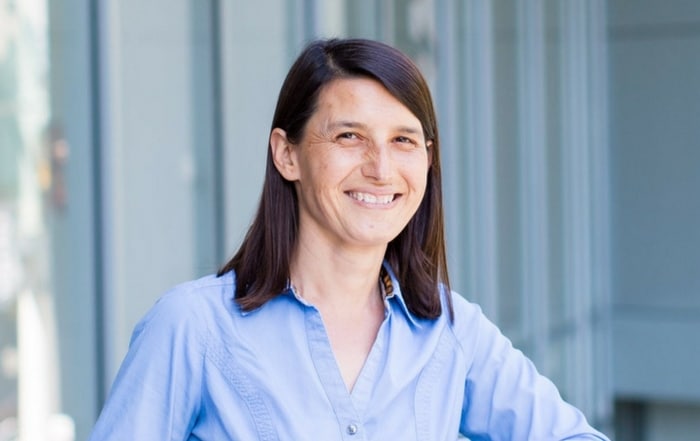 On the Steps Between Scientist and Founder: An Interview with Fatma Kaplan

When working with biotechnology, many times you find yourself in the odd scenario where you know where you want to get to but the resources you need to get there don’t exist yet. Bridging this gap, between what’s possible today and what will be possible tomorrow, is what innovation is all about.Biotech startups see this every day – having a goal in sight and then encountering all the high-risk, and sometimes way too steep steps, that need to be taken to reach it. Fatma Kaplan, co-founder and CEO of Pheronym, says that in the case of her pheromone-based technology that directs parasitic nematodes towards insects and away from plants, they have “a lot of goals, but getting there has a lot of steps in between.”

Fatma’s journey is an interesting one, having switched from Academia to Startup in a years-long journey in uncharted territory for her and her team.“I started out as a scientist,” she tells me of her founding story, “and what I thought initially was that, if we found something that had a potential for agriculture, we could patent it and then an industry person would pick it up and develop it. That was the idea that we as scientists had in our mind, because we all have that fantasy that what we discover will eventually contribute to science and it will play an important role in real life. So that was our goal, and when I discovered nematode pheromones in C. elegans, I thought from there it would go to the industry and it would make great things! And three years in, nothing had happened.”They had a patent, had done “all the right things” that academics are taught to do if they ever want to transition to Industry, but things were not moving along. Until their startup-aha-moment happened.

AirBnB’s founders had one of their (many) tipping points upon entering Y Combinator and following Paul Graham’s advice of moving to the New York City in the early days, to understand their customer base better. OpenTrons had their pivotal epiphany in the middle of their Kickstarter campaign, upon seeing their desktop pipetting robots have a market in formal research labs, instead of just for biohackers. Most life scientists were not taught to think about entrepreneurship and markets, so for biotech startups, some of the most important tipping points are prenatal. Such was the case for Pheronym and for Fatma specifically.“I was hired by USDA to apply this technology to parasitic nematodes. I really liked the idea and thought it was a great opportunity and a great way to tailor our research to practical applications, but in the end I wasn’t working directly with farmers. Later, though, a lucky break came through in the form of one of my collaborators: he was working with farmers directly, and was interested in beneficial nematodes and their efficacy – the pheromones I was working with were a good candidate to solve this problem. So he said, ‘Would you be interested in further developing this technology?’ And I said Yes! Our ultimate objective when developing this after all is getting it to the market, so this was a great opportunity.”This meant radically changing her approach to the project, but that was not apparent at first.“The first thing I thought was, we could write grants together to get some funding. At that time, I wasn’t really thinking about starting a company, but I mentioned it to my co-founder. He got really excited about it and started the paperwork and all. Now, he’s an economist, he knew what steps to take in order to start a company and establish an entity to write grants. But when we started really writing the grants we realized “oh… we actually need a lot more money than what we thought” Fatma tells me between laughs. “That was a learning, there! And then came another one, because when we started writing down the development plans we realized that it wasn’t as simple as we had imagined. What we did in the lab was one part of the whole Research and Development process, and the Development part actually took a lot more time, trials and experiments, to bring it to the market. So we have way more appreciation for the industry now!”

Academics in general face the same pre-conceptions Fatma and her team seemed to have: that once your lab breakthrough is done, the rest is bureaucracy. But we all find out sooner or later that this simplified playbook imprinted on us by universities masks most – if not all – the complexities of having real world impact. For Pheronym, these new intricacies became apparent almost immediately in their transition.“We thought we knew the territories we were getting into it and sure, we had some knowledge and weren’t totally clueless, but there were a lot of unfamiliar territories we had to venture into. We had to do market research, learn what investors and strategic partners look for and want to hear, how to raise funding beyond grants – there was so much to learn! Those are the things we never thought about. Like how suddenly money became a very important thing here, which is funny because as a scientist you are aware of this as you write grants and all, but when you’re in the business side you realize that the grants don’t really cover that much, and that you need to be sustainable somehow.”“We really developed an appreciation for the back office. Because when you’re in University, you’re in a structure that’s already working, and you just do one part. When you have your own business, somebody has to do registrations, payroll, taxes, and all the other business-related things, and that’s you! All of this you just took for granted before.”So what would Fatma have done differently? What is she certain she did right? She summarizes her advice to young scientists aspiring to become entrepreneurs like this.

Solidarity, ecosystem, roadmap for others

“For us, we met a lot of business people and that was great. Having a good ecosystem is key. Develop a good network of business people, and make sure they’re not ‘all the same’: every mentor we had, we learned something different from them. They had different points of view and expertise, and it was very helpful in many ways.Another suggestion would be getting into a business Accelerator or mentorship program. We started with paid entrepreneurship program in Florida that included mentorship and a co-working space. One of our main learnings there was how to speak about our project and how to talk about it in layperson terms. But then we got into IndieBio, and that was totally different. It was one of the most intellectually active places I’ve ever seen, such a total surprise to me! Because when we looked at the business side, we really didn’t know what to expect of it from the point of view of a startup. We had friends in industry and academia and we had a pretty good idea how they thought, but the startup world was uncharted territory for us. We thought we could do it because we had a goal, and that was to develop our tech, and we had partners and people interested in helping us; but the startup part was really new and different.”Luckily, Pheronym found the startup community to be welcoming – a great place to develop new applied technologies, even if it meant to also take over the complexities academia had previously solved for them.“At IndieBio, we learned how to pitch, met a lot of companies that were interested in our tech, we got a lot of opportunities. The people from our batch were very helpful too, we made some really great friends there. We didn’t know how the startup community was, but it was great, we all help and connect each other. The community itself is so diverse and supportive, there’s people from all over the world, and that makes a really big difference. They also have many female founders, too. It builds a better ecosystem, I think, and the community itself was one of our favorite things about IndieBio.We are connected even now through a private group for SOSV founders – It’s almost like having a family to go back and ask questions to!”This interview was conducted in March 2018.Fatma Kaplan will be speaking at SynBioBeta 2018: The Global Synthetic Biology Summit in San Francisco, October 1–3, Part of Synthetic Biology Week.