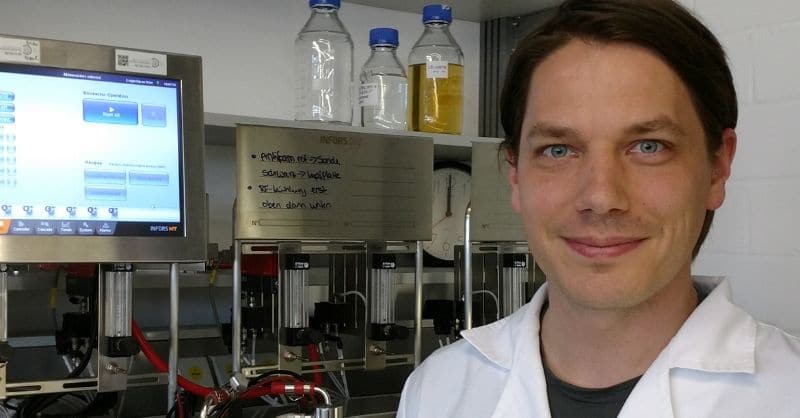 Ever since Isaac Asimov’s I, Robot, a series of science fiction stories published throughout the 1940s, popular culture has been obsessed with robots. We romanticize their potential, fear their uprising, and trip over their vacuum cousins.Now, robots are entering biology, promising to run experiments faster (and more reliably) than any scientist could. They are being used to grow and monitor hundreds of engineered organisms at once, precisely mix billions of strands of DNA, and even transform or pick bacterial colonies from plates automatically. Nobody enjoys the tedious task of cloning DNA; now the entire pipeline can be controlled online.For metabolic engineers - scientists that rewire the metabolism of organisms to utilize unique food sources or produce valuable molecules from engineered organisms - automating experiments is particularly beneficial.“In biology, we still have so much to learn from experiments. Predictions need to be verified from experiments and then constantly modified, which requires a lot of trial and error,” says Professor Johannes Kabisch from Technische Universität Darmstadt.Kabisch’s group, which focuses on metabolic engineering of Bacillus subtilis and Yarrowia lipolytica, has fully embraced robotic platforms for their metabolic engineering projects.“The goal of my group is really to develop microbial cell factories for a renewable, hydrocarbon-based bioeconomy. We are trying to find biological substitutes for things we currently derive from fossil fuel,” explains Kabisch. Already, his group has developed new tools to regulate gene copy numbers in B. subtilis and has produced hydrocarbons from glycerol in Y. lipolytica.

CompuGene robotics platform (Dr. Sudo), an automated experimental system used to rapidly engineer and test organisms. Image courtesy of Johannes Kabisch.For Kabisch, the only way to rapidly prototype metabolic designs (and usher in a truly hydrocarbon-based economy) was to build a state-of-the-art robotic system, which the lab calls Dr. Sudo (a reference to an xkcd comic). Once constructed, it could build thousands of unique DNA constructs, transform them into cells, and measure the results, with almost no human intervention. Kabisch’s experiments went into overdrive.

One Robot, One Task

To capture heaps of reliable data and explore metabolic designs more quickly, Kabisch turned to Analytik Jena to build a modular robotics platform. They adopted a “one robot, one task” approach, where each machine performs one part of the experiment, before passing along the sample to the next machine in the pipeline.“When we designed this Analytik Jena platform, our goal was to design it with a Unix principle in mind: one tool, one task. We did not want to design a platform that does everything, so ours only does two tasks – one system automates cloning, which enables us to build sufficient variations of circuits, and the other system measures these circuits using flow cytometry and microplate readers.”While something like cloning seems, on the surface, a relatively trivial process, it demands a wide array of specialized equipment, including PCR thermocyclers, liquid-handling robots, and incubators. Kabisch knows every piece of equipment in his lab by heart.“We have a CyBio FeliX pipettor with eight channels, which can do cherry-picking and pipet individual wells. We also have a 96-well CyBio FeliX, which we use to make aliquots for measurements or to induce cells at 96 or 384 positions at once,” explains Kabisch. “We also have a nanoliter dispenser, called Dispendix I-DOT, which does nanoliter dispensing. This is especially useful for DNA work because we want to use as little DNA as possible. Creating DNA with a specific sequence requires a lot of work. You need to grow cells, isolate DNA, and so forth. At a large scale, this is a lot of effort and a source of errors.”The Kabisch lab has a library of sequence-verified parts, which they can assemble in unique combinations to build almost any desired sequence. The pipetting robots help immensely with this process, carefully controlling the concentrations of DNA used in the reaction. Once the DNA parts and reagents are added to the plate, a robotic arm passes them along to a thermocycler Biometra TRobot, which can perform ligase cycling reactions, an efficient method to assemble plasmids from fragments of DNA.Together, these machines enable hundreds of DNA devices, circuits, or multigene pathways to be assembled in the span of a few hours, with little human interaction.But creating the desired DNA sequences is just the start. The DNA must then be transformed into cells and their effects measured.Fortunately, Kabisch has a solution for that. Another set of machines complete the cloning pipeline, transforming the DNA into cells and placing them into a plate incubator. After growing the cells, they are picked and measured.“This platform also has a cytometer for measuring single cells, along with a really fast plate reader that does fluorescence and chemiluminescence measurements for plates with up to 3456 wells at once,” says Kabisch.

The machines used by the Kabisch lab, many of which are part of Analytik Jena’s lab automation product line. Image courtesy of Johannes Kabisch.Building an automated system to clone, transform, and measure living cells is no small feat for even a single experiment. But what about running thousands of experiments in parallel? The logistics can quickly become overwhelming, even with the help of robots. This is why the software controlling the lab automation platform is so important.“The software that controls and connects all of the individual machines is called Composer,” says Kabisch. Analytik Jena’s Synthetic Biology consultants liaise with his lab to suggest and support the best design and smoothest programming of the workflow, “so we have scripts ready to move things and actuate the hardware,” he explains.But Dr. Sudo is not only an automated experimental platform: it is learning how to automate the design of the experiments themselves.“Right now, this platform can actually learn from experiments and automatically detect optimal inducer conditions in a variety of media. So basically, you start the process with a broad range of inducers, and the platform measures the first response to the inducer concentrations, and then automatically starts the next experiments. Through a simple grid search, it finds the optimal inducer concentration. This could maybe be done by hand, but as you scale up the variables of media and strains and look at the single-cell level, this quickly becomes very difficult to do by hand,” says Kabisch.While it’s nice to have a lab automation system, the speed at which experiments can be performed can quickly become a diminishing factor in experiments. The rate limiting factor then becomes:What should we do with all this data?

As Dr. Sudo hums away, cranking out thousands of DNA constructs, shooting cells through a flow cytometer, and churning out data, the scientists in the lab scramble to interpret it. They want to use the flood of experimental results to better predict biology – an ambitious project called CompuGene.“The goal of CompuGene is to create predictive models for molecular circuits…Currently, if I want to do metabolic engineering and I want genes in a synthetic pathway to have certain expression levels or logic, the process is totally trial-and-error,” explains Kabisch. “CompuGene wants to try to build predictive models for that.”CompuGene, headed by Beatrix Süß and Heinz Koeppl, is a consortium with over a dozen members. Together, the team has already used robots like Dr. Sudo to create tightly-controlled, CRISPR-based logic gates in yeast that behave predictably in vivo. But their ambitions do not stop there.“We have built a variety of new parts, like RNA-based switches and aptamers, and dCas-based switches, but all of this is done in an interdisciplinary context,” says Kabisch, who actively recruits students from disparate disciplines to work in his lab.“We have an office, called the Modeling Lab, which students from physics, computer science, mathematics, chemistry, biology, and electrical engineering all share,” says Kabisch. “The biology students help the physicists improve the models because they know which parameters can actually be measured. The goal of CompuGene and these interdisciplinary interactions is to create new parts, new switches, and devices, but also to advance automation. This way, we can generate new models and new knowledge.”Despite the rapid pace of the CompuGene consortium, they still acknowledge the barrier to entry for other groups aiming to pursue similar lines of research. Robots are not cheap. Fortunately, groups like Kabisch’s aim to lower the robot-entry barrier by developing low-cost, do-it-yourself alternatives for certain experimental protocols.“Most people will not be able to get a robotics platform, so we are working on a few things,” says Kabisch. “For example, we did not have enough money to buy a colony picker, so we developed an open-sourced, low-cost colony picker that is built from 3D printers. This way, you get a colony picker for roughly 300 euros. Of course, it’s not like the high-end machines, but it also costs a lot less.”By pushing the concept of computer-aided synthetic biology forward on multiple fronts, from automation to model building and 3D-printed solutions, Kabisch aims to make a real impact in engineering biology, and implement his findings at industrial scales.The question remains, however – are robots truly a complementary experimental arm, here to support our most daring scientific questions? Kabisch thinks so.“We really want to make better processes to capture carbon waste to produce biofuels. The fossil industry is in dire need of new solutions to capture and convert carbon from the atmosphere… Robotics lends itself to exploring potential solutions for these complex experiments in metabolic engineering.”Bring on the robots.Learn more about emerging technology platforms and how they could propel your work forward at SynBioBeta 2019, October 1-3 in San Francisco.