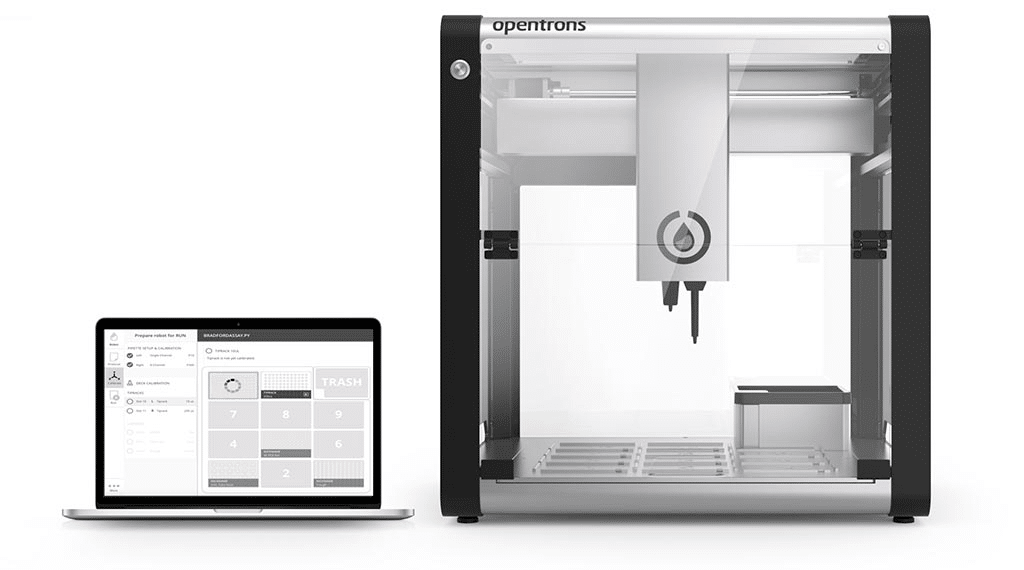 In tandem with the tech revolution of the past couple decades, biology has received a steady infusion of automation over the last few years, bridging gaps and catalyzing progress across disciplines. Whether through robotics or advanced computational analysis techniques including machine learning, companies of all sizes have been increasingly willing and able to adopt a variety of technology to accelerate innovation. A major emerging player in this automation accessibility revolution is Opentrons, a Brooklyn-based biotech company that makes robots for biologists “to provide the scientific community with a common platform to easily share protocols and reproduce each other's results,” rooted in an ethos of open-source and DIY simplicity and accessibility. Just in time for SLAS2020 (Society for Laboratory Automation and Screening’s annual conference), Opentrons, well known in the field for its OT1 and OT2 liquid handling robots, is announcing its next generation of products—workstations that bundle various protocol packages to augment its regular robotic platform. These workstations include “kits” for PCR clean-up and library preparation with all the necessary reagents, tools, and validated protocols.This new bundling approach is the next step in the evolution of democratizing automation in biology, particularly for expanding the user base to the next realm of interested biologists, who may have been previously hesitant to wrangle with optimizing and troubleshooting for early versions of robotics tools. “There’s the first type of customer who we already serve pretty well because they know exactly what they need from Opentrons,” says co-founder and CPO Will Canine. “They’re going to buy that and they’re going to write the code for their protocol because they’re experts in this stuff.” This initial community is comprised of early adopters and evangelists of open-source robotics, contributing to the effort of making automation available to all biologists.“The second type of customer doesn't want to do any of that,” Canine says. “We're offering them a plug and play solution to automate digital workflow, because, for example, they’re not a genomic sequencing lab—they’re just using genomics. And that's what I think the bundling enables.” The first type of customer loves not only biology but also coding and hacking, making a robot a “cool toy” to play with. Through this next generation of products, Opentrons has reached the second customer—the biologist “who's never been like, ‘I want a cool piece of tech.’ They're just like, ‘I care about my research. You can actually help me do my research, great, but I'm not trying to go hack on a robot with my professional time because I'm a biologist.’” Canine cites the Rogers Adoption Curve (also known as the Diffusion Process) to describe how innovation in biological automation is being accepted and integrated, akin to the experience of a typical tech hardware company. The curve consists of the innovators, followed by the early adopters and early majority, and finally the late majority and the laggards. Opentrons is crossing over from territory of the “early adopters” into that of “early majority,” as seven out of ten of its customers have never automated anything before and are being introduced to this workflow ethos through the company. “We’re really at the point where we can start working for the more of the early majority people ,” he says. “That's obviously important for our mission to automate every lab in the world, so this kind of bundling really unlocks the potential for us to have a great impact as a major accessibility feature.” With this next wave of automation, regardless of the user, the future for accessibility in efficiency for scale and efficacy in biology certainly looks bright. In keeping with Opentrons’ goal to bring automation to everyone, the company recently published a new digital guide for adding automation to your laboratory. You can download the e-book here.