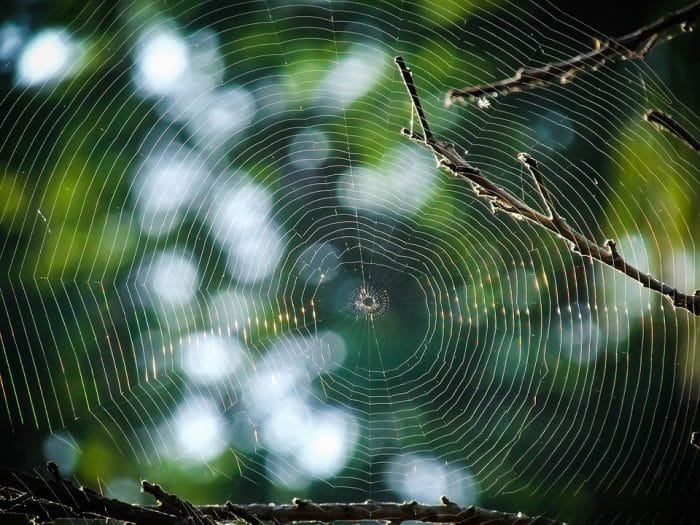 Synthetic biology has, for the last fifteen years, almost completely dominated science headlines. The field is at the forefront of the DNA-editing and CRISPR revolutions, the rapid drops in DNA sequencing costs and even the creation of entirely new organisms, including cells with completely synthetic, chemically-synthesized genomes.

Nature has produced a diverse, awe-inspiring blend of materials, ranging from cotton and silk to chitin and cellulose. Organisms manufacture biomaterials that can serve either functional or aesthetic purposes. Examples of common biomaterials include cellulose, starch, polymers (such as DNA and proteins) and the silk produced from spiders. Synthetic biologists are inspired by the breadth of exciting materials that nature can produce and, in response, have created genetically-engineered or partially synthetic organisms to improve upon these biomaterials.

Cotton flowers produce a soft, lush material that can be woven into clothing and other fabrics.

Recent research has demonstrated that E. coli, a simple bacterium, can be engineered to form biofilms with unique properties. Laboratories have engineered these E. coli biofilms to conduct electricity and catalyze certain reactions on demand.

In the Imperial College Centre for Synthetic Biology, Dr. Tom Ellis’ laboratory is devising new ways to mass-produce cellulose using an organism called Komagataeibacter rhaeticus, or K. rhaeticus for short. In 2014, a team of undergraduate students at Imperial College also sequenced and published the complete genome of Gluconacetobacter hansenii (all 3.4 million base pairs), a high-yield bacterial cellulose producer, and developed new tools to reliably engineer the organism.

K. rhaeticus colonies with unique morphologies.Scientists at CustoMem, a biotechnology company based in London, are using these bacterial species to produce cellulose and then weave it into filtration devices that can selectively purify certain contaminants in water. Their goal is to capture and remove heavy metals and micro-pollutants from water, and to do so cheaply and renewably.

Scientists have also managed to engineer yeast, the same organism responsible for the fermentation of beer, wine and kombucha, to produce silk. By isolating silk biosynthesis genes from spiders and transforming them into yeast — and optimising the whole process a lot — the yeast begin to produce silk fibers, which can be woven into extremely strong, flexible materials without the need for spiders.

Bolt Threads, a company based in San Francisco, pioneered this technology and sold a limited number of neckties made of the synthetic silk material. I have previously written about another Bolt Threads’ biomaterial, a faux leather made of fungi, which you can read here.

But not all biomaterials that are devised by synthetic biologists are adapted from materials found in nature, like cellulose and silk. Dozens of laboratories also have an interest in creating entirely unnatural biomaterials.

Professor Peter Schultz, an internationally-renowned chemist and the CEO of the Scripps Research Institute, pioneered unnatural amino acid chemistry. Though most living cells only use 20 amino acids, the Schultz laboratory has managed to create several organisms, both prokaryotic and eukaryotic, that can incorporate 21 or more amino acids stably in the genetic code. This enables organisms to create a greater repertoire of protein polymers.

Many synthetic biology laboratories also have an interest in creating cells that can produce conductive biomaterials. When exposed to electricity, these materials have a low resistance and can transmit the energy between cells or tissues. These conductive biomaterials include polypyrrole, polyaniline and poly(3,4-ethylenedioxythiophene), all of which are used in tissue engineering. It may be possible to engineer cells (either E. coli, yeast or mammalian cells), to build these polymers and then secrete them into their environments, enabling conductive scaffolds between cells.

Nanofibers like these could one day be reliably produced with defined widths from living cells.In the years to come, it is almost a certainty that scientists will create entirely synthetic organisms (that is, their entire genome has been designed and chemically-synthesized from scratch) that are capable of building wildly unique biomaterials to address broad applications in healthcare, environmental remediation and diagnostics. The laboratory of Floyd Romesberg, also at the Scripps Research Institute, has created a new, semi-synthetic form of E. coli that can stably replicate, transcribe and translate 6 bases of DNA (A, T, G, C, X, Y) instead of the natural 4 bases (A, T, C, G). This organism can incorporate far more than just the natural 20 amino acids, vastly expanding the protein polymers that can be built from a living cell.

An aerial view of the Scripps Research Institute in La Jolla, California.

An international consortium of research laboratories from the US, China, the UK and elsewhere are also chemically-synthesizing the entire ­yeast genome from scratch; this will be the first eukaryotic cell to contain a fully synthetic genome. The new yeast, called Yeast 2.0, will have some unique features; it can incorporate 21 amino acids instead of 20 and its entire genome can be rearranged, or ‘scrambled’, on demand.

Note: On May 22, 2018 the journal Nature Communications released a Special Edition on Yeast 2.0. Seven articles were published on the SCRaMbLE system for yeast genome rearrangement.

Scientists are not the only ones having fun with synthetic biology and biomaterials, though. Stefan Schwabe, an artist from Germany who has had major exhibitions in Linza, Austria, New York, Istanbul and London, is famous for his use of cellulose as an art form. Schwabe has made toilet paper and even fully-fledged sculptures from bacterial cellulose, proving that biomaterials can be both functional and captivating.

It is no longer a pipedream to design and engineer microorganisms to produce diverse, functional biomaterials. Scientists and artists are doing it every day in laboratories and workshops all around the world. Here’s to hoping that we all benefit.

Conductive polymers: Towards a smart biomaterial for tissue engineering

This article was originally published on Medium