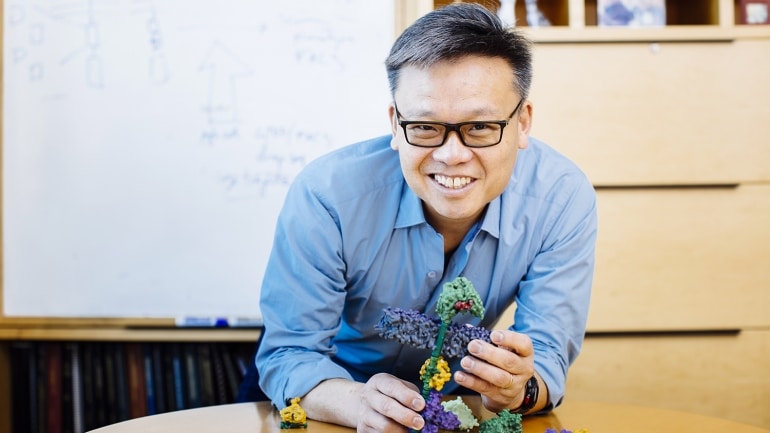 For many, the term synthetic biology brings to mind unnatural systems. But synthetic biologists get much of their inspiration from naturally evolved cells. Our immune system has developed incredibly elegant systems for combating disease. Dr. Wendell Lim of the University of California in San Francisco wants to program that system to fight cancer. His lab is using synthetic biology to tackle some of the most challenging obstacles in this promising new field of engineered cell therapy.

“Science has a certain aesthetic to it,” Lim told me in a recent interview.Lim got his start studying the structure of proteins involved in signaling pathways. You can see from his artwork that Lim has an eye for shapes and patterns.As a postdoc, Lim was struck by the fact that different cellular signals are transmitted by patterns of molecules that look similar. So similar, in fact, that with just a few mutations, his lab later rewired a yeast cell, so that its ability to tolerate salt was linked to its sensing of pheromones (think sex).After seeing the same patterns over and over again, Lim concluded that these different pathways likely evolved from similar building blocks and blueprints. “Evolution has made modular components and is using them as a toolbox to create new kinds of regulatory behaviors,” he said.Like most synthetic biologists, Lim saw this modularity as an opportunity. “Could we actually mimic evolution? Could we start trying to use simple molecular components as building blocks to create synthetic behaviors in cells?”It was about that time that Lim met Carl June, one of the pioneers in engineered T-cell therapy. Engineered T-cell therapy is a groundbreaking cancer intervention in which the therapeutic agent is the patient’s own cells.

Engineered therapeutic T cells provide a transformative new platform for interfacing with complex diseases such as cancer. Source: The Principles of Engineering Immune Cells to Treat Cancer.At the time it was seen as kind of a “crazy field,” said Lim. But the clinical results spoke for themselves. Lim and June brainstormed the many ways that synthetic biology can expand our ability to program T-cells, and Lim’s work in engineered cell therapy took off.“Traditionally cancer has been combated with molecules,” said Lim. He describes cancer as an ecosystem where cells are collaborating in a way that creates a new type of tissue that’s growing out of control.Picture an angry mob. Molecular drugs attack somewhat indiscriminately—like a smoke bomb in the crowd. It would be better to have an agent that could infiltrate and precisely disrupt that ecosystem. The revolutionary idea: What if that agent was a cell?

The mechanics of anti-cancer cell therapy

The currently approved T-cell therapies target B-cell lymphomas. B-cells and T-cells are both involved in immune response. B-cells produce antibodies against viruses and bacteria directly. T-cells attack and kill infected cells.In B-cell cancers, such as Hodgkin’s and Non-Hodgkin’s lymphomas, cancerous B-cells replicate out of control. The idea behind engineered T-cell therapy is to train T-cells to target these problematic B-cells.The surface of most B-cells is decorated with a protein antigen called CD19. In engineered T-cell therapy, the patient’s own T-cells are extracted, engineered to recognize CD19, and reintroduced into the body. The engineered T-cells, called CAR-T cells, attack and kill the cancerous B-cells.Unfortunately, the CAR-T cells can’t discriminate between cancerous B-cells and healthy B-cells. That’s why the therapy is reserved for the sickest patients, in whom chemotherapy has repeatedly failed.The CAR-T cells also aren’t very effective at infiltrating and attacking solid tumors. But they’re incredibly effective at killing the cells they can get to, signaling a promising area for future development.https://vimeo.com/ucsfthecampaign/cell-engineering

Lim says there are three main challenges ahead for engineered T-cell therapy: potency, recognition, and control.Potency refers to how effectively engineered cells kill their target. When T-cells attack, cancer cells can fight back, and solid tumors create a particularly hostile environment for CAR-T cells. Lim and his team have engineered CAR-T cells with increased potency against both solid tumors and blood cancers by enabling them to shut down one common tumor cell defense strategy.But you can’t increase potency without also increasing recognition, the engineered cell’s ability to target cancer cells and only cancer cells. For instance, researchers in Lim’s lab designed a system in which engineered cells must recognize two different tumor antigens before attacking, so fewer healthy cells get caught in the crossfire.Control is where synthetic biology becomes especially useful. Because these engineered cells are not completely innocuous, it can be useful to control and direct them. This could mean activating or inactivating the cells with secondary molecules, incorporating a kill switch when the therapy is complete, or restricting their activity to specific regions. Targeting CAR-T cells to a specific site could also increase their potency against solid tumors.Lim says that to realize their full potential, engineered T-cell therapies need improvements in potency, recognition, and control. His lab is tackling these problems by asking a simple question: How do cells make decisions? If we understand how T-cells decide what to attack, when, and with how much ferocity, we can use that knowledge to engineer safer, more effective cancer therapies in the future.Want to stay on top of the latest developments in cell therapies? Engineered Cell Therapies is a key theme at SynBioBeta 2019, October 1-3 in San Francisco, CA, where industry experts and thought leaders will discuss the most exciting new advances and important challenges facing cell therapies.