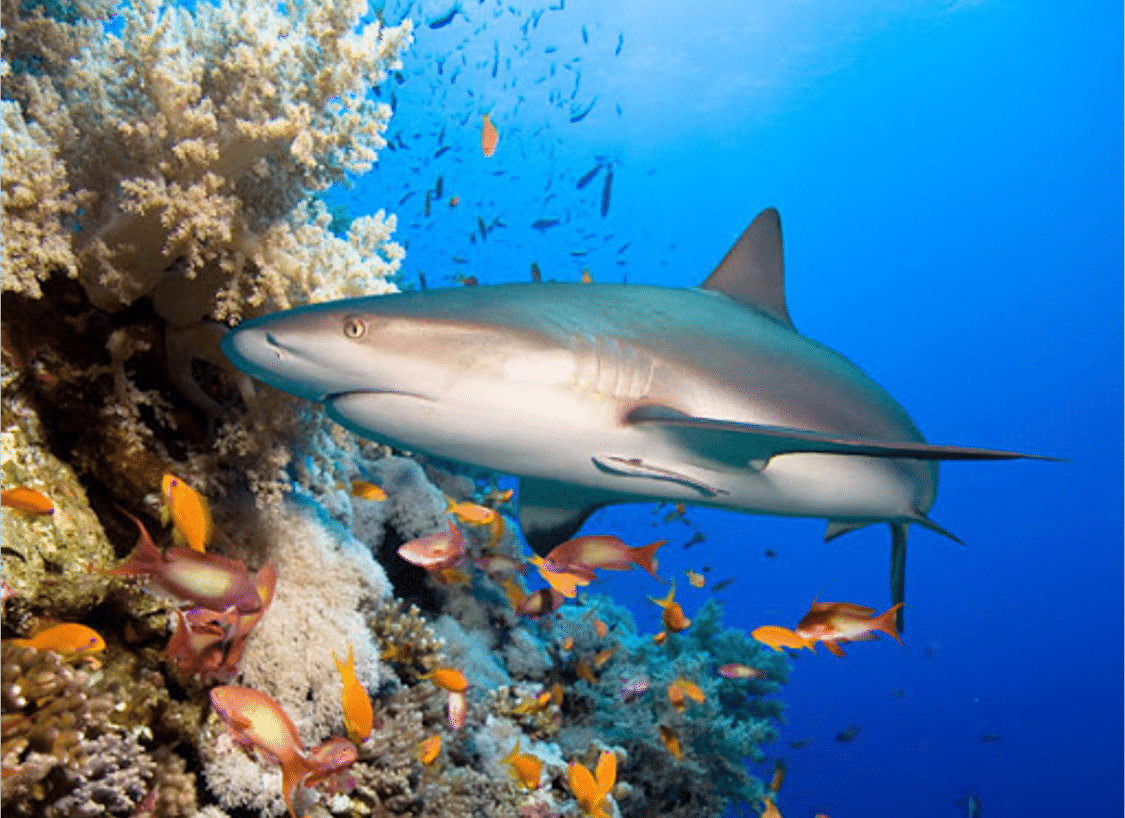 Our blue planet runs on ocean ecosystems that are currently in steep decline. In the last 50 years, the amount of fish captured from the ocean every year has increased from 20 to almost 100 million tons. In the same period, the percentage of overfished fish stocks has risen from 10 to 30% (source). The demand for ocean-derived ingredients is only continuing to grow. For marine conservation efforts to succeed, it is necessary to find sustainable alternatives to ocean resources. New synthetic biology innovations could help protect key marine populations threatened by hidden consumer demands.

Sharks were predators at the top of the ocean food chain long before there were dinosaurs. Today, they are one of the most commercially overfished species and vulnerable to extinction. Sharks are hunted for their fins, meat, and livers, the latter of which contains high concentrations of an oil called squalene. Human skin also produces squalene, but the amount decreases with age. When squalene is converted to its hydrogenated form, squalane, it becomes a shelf-stable anti-aging ingredient often added to creams, lotions, and oils. In 2012, the squalane demand from the cosmetics industry resulted in around 2.7 million deep-sea sharks killed per year.http://www.bloomassociation.org/en/the-hideous-price-of-beauty/ Recent advances in bioengineering have made it possible to make squalene made from sugarcane. Bio-based squalane, developed by synthetic biology company, Amyris, is now commercially available through major retailers like Sephora. How many sharks are now spared from ending up in moisturizers? According to John Melo, the CEO of Amyris, the company accounts for about 70% of the world’s market for squalane. “ two to three million sharks about 20% of the land of Central Park worth of sugarcane,” says Melo.

Amyris derives its squalane and squalene from sugarcane, rather than shark livers. Image: AmyrisIt may come as a surprise that sugarcane can produce an oil found in shark liver. It all comes down to carbon. “ is an amazing crop to harness carbon from sunlight,” says Melo. “Extracting that carbon from sugarcane is really easy. You beat the heck out of it; you actually squeeze all the juice out. And through a fermentation process, you convert that carbon by using synthetic biology into exactly the structure you want.”Amyris’ beauty line, Biossance, was launched in 2016. But squalene has gotten a new spotlight in the race to develop COVID-19 vaccines. In vaccines, an adjuvant is a component that strengthens the immune response. One of the most effective adjuvants comes from shark squalene.The staggering leap in mRNA vaccines in the last year has also sparked research into adjuvants for these vaccines. When added as an adjuvant, squalene can “turbo-charge” the efficacy of mRNA vaccines by helping carry the mRNA in the bloodstream, reducing the amount of mRNA required by a factor of 10. It’s important to note that there are no squalene adjuvants in the current COVID-19 vaccines. But according to Melo, Amyris is betting on the future of mRNA vaccines and preparing to produce sugar-derived squalene at scale.Innovations like bio-based squalene and squalane offer protection for apex marine predators like sharks. But on the extreme other end, synthetic biology efforts are also underway to relieve the pressure on fish at the bottom of the food chain.

You Are What You Eat

Sardines are caught to produce fishmeal and fish oil for aquaculture. But overfishing these forage fish can disrupt entire ocean food chains. Image: PxHereFarmed fish are close to overtaking wild fish in the market. However, both rely on wild-caught fish for their diet. Farmed species like trout and tilapia rely on feed which includes fishmeal and fish oil. These ingredients often come from small, fatty fish lower on the food chain like sardines often referred to as forage fish. In a catch-22, farmed fish are fed wild-caught fish, meaning even if farmed fish are raised more sustainably, their feed still depletes fragile ecosystems. When forage fish are removed from the base of marine food chains, sea birds, marine mammals, and wild-caught fish all face sharp reductions to their food supply. This sustainability paradox, feeding wild fish to farmed ones, has become a driving force in developing alternative fish feeds and fish oils. A challenge by the F3 Team is now calling for the proposed alternatives for fish feeds. Ultimately, the F3 Fish-Free Feed Challenge aims to increase the commercial adoption of ingredients that can substitute for forage fish, fishmeal, and fish oil. Aquafeed expert Dr. Rick Barrows and Chief Scientific Advisor for F3 says there are misconceptions about the nutritional needs of farmed fish. “Farmers were saying, ‘Oh, you have to feed fish meals to fish because they require it.’ Well, “It's the nutrients that are important, not the ingredients.” says Barrows.With this emphasis on nutrition, the doors are open to bioengineers to create bio-based alternatives throughout aquaculture supply chains. This is particularly true for marine-derived oils like fish and krill oils. Krill are frequently used for whetting the appetites of farmed fish. But krill are also essential to the carefully balanced Antarctic ecosystem. A previous challenge by the F3 Team for bio-based fish oil is estimated to have saved 2 billion fish from aquafarms. But there are currently no significant alternatives for krill oil. Leaving krill in the oceans protects animals throughout the food chain, from fish and penguins all the way up to sharks. Creating bio-based aquafarm fish feeds doesn’t just protect sea life. It can also help reduce harmful toxins in human diets. When farmed fish make their way to the table, those fed with plant, algae, or insect-based, or bioengineered ingredients also possess another clear health benefit: They are potentially uncontaminated by the pollutants and microplastics concentrated in the wild-caught food chain. Barbara Page, Principle of the F3 team says, “This is an example of where you can build back better. If you do feed them sustainably, these fish don't have toxins from heavy metal or ocean plastics, and they can taste great.”

Help forests are home to unique ocean ecosystems but are severely threatened by warming seas. Synthetic biology could offer new tools to protect these habitats. Image: FlickrConserving biodiversity and restoring balance to depleted ecosystems is a tall order for synthetic biology. Sharks and sardines are only small pieces of the marine conservation puzzle. Around the world, scientific ventures range from genetically engineering heat-tolerant corals and kelp to developing microbial fertilizers that eliminate agricultural runoff into the ocean. Integrating synthetic biology into conservation strategies could provide much-needed aid for marine preservation. These novel technologies also look to play a greater role in protecting biodiversity globally and addressing the effects of climate change. But bioengineered solutions only represent single trees in a forest of challenges. Ocean acidification, plastic pollution, rising temperatures, all these threaten the future of our blue planet. The synthetic biology community can not solve these systemic challenges alone. Fully protecting marine environments will require international cooperation and greater awareness about the importance of these ecosystems. But in nature, everything is connected, balanced carefully by evolution. The successes of restoring that balance, shark by shark, sardine by sardine, should not be overlooked. Looking to learn more about where the synthetic biology industry is heading? Get access to our top 9 panel discussions and hear what synthetic biology investors, entrepreneurs, and thought leaders envision for the future of the industry. Join the Bioeconomy Revolution today!