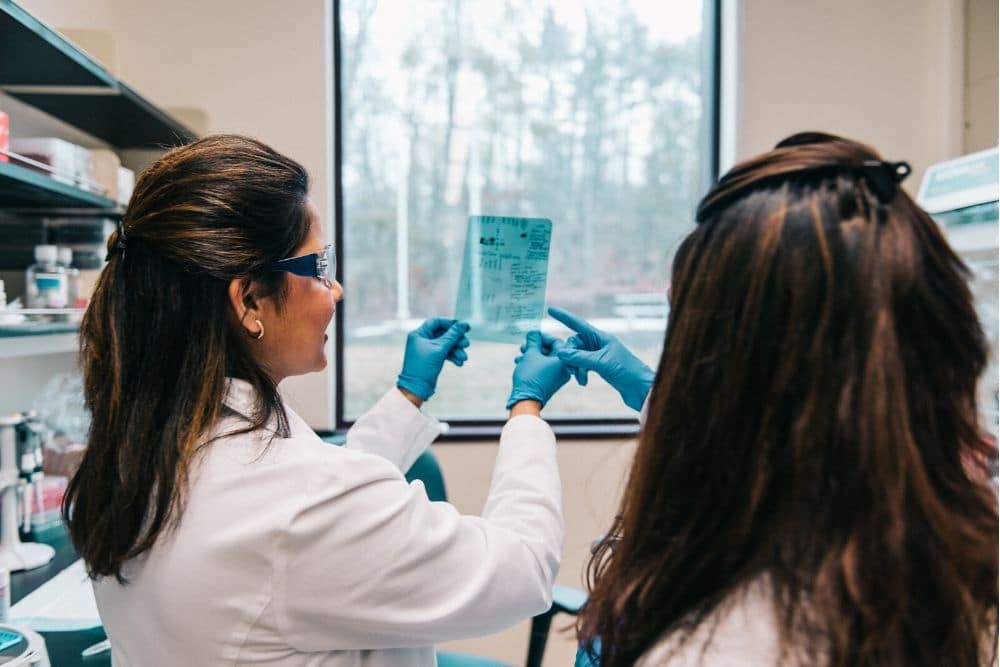 If I were to ask you to imagine someone with “cancer,” you’d probably imagine a hairless face. And while hair loss may be the universally recognizable side effect of cancer treatment, patients on chemotherapy suffer from a wide range of side effects that are much more debilitating. One such side effect is a painful rash caused by EGFR inhibitors which affects 50-100% of patients taking this form of chemotherapy. The rash is so disruptive to the patients’ quality of life that many opt to stop taking the medication. I don’t have to go into the consequences that can result.But what if I told you the solution to this problem might be one you can’t even see with the naked eye: bacteria?

The therapeutic potential of the microbiome

It might seem crazy, but there is a precedent for using bacteria to treat disease. An XX clinical trial on 14 patients with recurrent Clostridium difficile infection showed that a fecal material transplant (FMT) to introduce a healthy bacterial community to an individual’s gut yielded an 8x% success rate after only a single treatment. Two additional individuals were cured after just one more treatment. These success rates blow those of typical pharmaceutical drugs in clinical trials out of the water. FMT is now an FDA-approved “drug” for treating recurrent C. diff infection.But FMTs, much like probiotics, are a shotgun, throw-the-kitchen-sink-at-it solution toward making a healthier gut microbiome. Could other microbiome-based therapeutics see equal success rates, or was the FMT story a lucky one-off? Rick Andrews, CEO of the biotech Azitra, thinks that if we design microbiome-based therapeutics the right way, it doesn’t have to be.

Rick Andrews, CEO of AzitraSo, what is the “right way” to design microbiome-based therapeutics? According to Andrews, it all starts with identifying your clinical target -- and then designing the right microbe for the job.

With therapeutic approaches that target entire bacterial communities, it can be difficult to impossible to determine whether an intervention works, let alone dissect why it works. Azitra’s approach is a bit more like reverse engineering: identify the clinical problem you want to target, then understand the mechanism of action of the microbe (not microbial community) you wish to use as the “treatment,” and, finally, produce and test that microbe in action.In Azitra’s case, the clinical targets are skin conditions such as eczema, Netherton Syndrome, or rash caused by chemotherapy, and the microbe is Staphylococcus epidermidis, a normal bacterial resident of human skin. A growing body of research has shown that S. epidermidis is naturally anti-inflammatory, in large part due to its ability to inhibit Staphylococcus aureus, another bacterial species that causes or worsens existing inflammation. Leveraging the natural anti-inflammatory characteristics of S. epidermidis, Azitra is creating “supercharged” versions of the bacteria that can provide additional benefit -- such as delivering the human protein lacking in patients with eczema.While the majority of microbiome-based companies are working toward understanding the microbes in our guts, skin is a great organ to work with for developing microbiome-based therapeutics. Compared to the gut, it is much easier on the skin to measure the clinical endpoints that determine whether or not a microbial therapeutic is effective for treating a disease.“I admire the gut people greatly because they pioneered our understanding of the role of the microbiome, and they did it in a place that's really hard,” says Andrews. “We have a much more well-defined environment in which to operate. We can see on the skin what happens, we can measure on the skin what’s going on, and then when we treat we can monitor where our strains go and how they interact with other strains on the skin.”He adds that focusing on a specific problem rather than microbiome dysbiosis as a whole also increases the chances that a microbiome-based therapeutic will make it to the clinic sooner than later because data collection and analysis are more straightforward.“If I go to a clinical trial and I say, ‘I'm going to correct your microbiome dysbiosis,’ I'm going to have to enroll 3000 patients, and the data collection problems would be massive,” says Andrews, laughing. “But when you take a targeted approach, you can target a problem … with a well-designed, targeted therapy. That's the Azitra approach.”Targeted therapies can also be designed to tackle a problem in multiple ways. Take eczema, for example. The disease manifests due to a skin barrier defect, but research also shows that the disease is characterized by a microbiome defect in which levels of pro-inflammatory Staph aureus are too high on the skin. Using their “supercharged” S. epidermidis, Azitra can not only target the defective skin barrier, but also help resolve the inflammation caused by S. aureus by reducing it on the skin."We can give the patient a more meaningful therapy because it's coming at them from two points -- it’s a dual effect. And because it's a microbiome product, it has the potential to be a sustained effect,” says Andrews.

Andrews believes that targeted microbiome-based therapeutics also present an opportunity for helping the patient understand and appreciate the dynamic interaction that goes on between their human systems and the microbes that call their bodies home -- and how this can lead to disease or specific symptoms associated with a certain condition. This better understanding, in turn, is likely to improve patient adherence to treatment and the overall success of a therapeutic regimen.He sums it up this way: “The microbiome can become part of our lives, it just becomes one more really excellent tool that we can bring to patients.”Azitra is well on the way toward realizing such treatment for patients. 2020 promises to be a big year for the company, with three clinical programs moving forward. One of the programs is a clinical trial testing the efficacy of their therapeutic S. epidermidis to reduce that debilitating rash experienced by patients on chemotherapy. They also will be testing therapeutic protein delivery in patients with Netherton syndrome, as well as multi-dose studies for their existing eczema therapeutic.“We have enough potential with the microbiome to significantly impact healthcare,” Andrews says. “If you think about the microbiome and its relationship to the body, it is a whole new dimension that we’ve forgotten over the last 50 years. now we're focused on it, so small changes in what is a complementary system -- the microbiome -- can lead to really dramatic effects.”