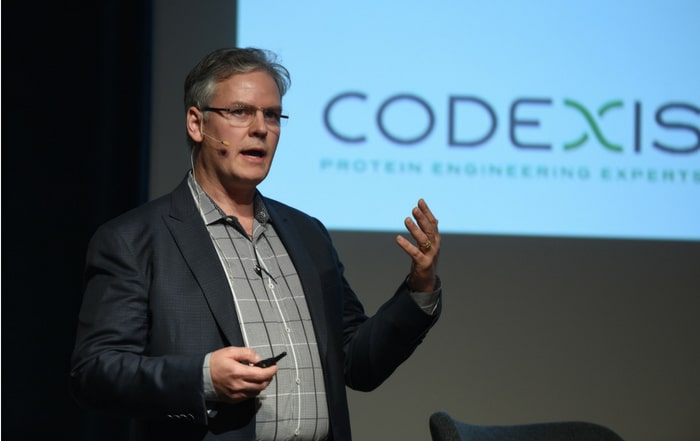 This sponsored content is made possible by Codexis. Whether it’s food ingredients, therapeutics, or high-performance enzymes, Codexis is engineering proteins better, faster, and cheaper than ever. To learn more about its revolutionary CodeEvolver platform technology, visit codexis.com.

That was the takeaway from a recent Boston CEO panel entitled “Leveraging Synthetic Biology for Biopharma Innovation”. Codexis CEO John Nicols and Ginkgo’s Ena Cratsenburg convened for a discussion with pharma industry ‘power users’ Merck and GSK.“Companies like Merck and GSK are leading the way in pharma,” Nicols told me. “They are building the bridges from their historical discovery and manufacturing approaches to increasingly apply cutting edge synthetic biology tools like Codexis’ protein engineering.” Pharma’s embrace is also reflected in the amount of investment in synthetic biology companies, too, from half a billion dollars just three years ago to a projected $2.4 billion in 2018.A recurrent theme was just how much bioprocessing has advanced, such that it’s having an impact of the manufacture of complex drugs. John Baldoni, who leads GSK’s new in silico drug discovery arm, noted that just 30 chemical reactions account for 85% of all chemistry across the entirety of GSK’s small molecule drug pipeline. This, he said, underlines the importance of being able to subtly modify those few reactions quickly, cheaply, and in subtle ways. Baldoni (a SynBioBeta 2018 speaker) said that in the last five years alone, GSK has applied a biotransformation approach using novel protein catalysts to a significant proportion of those key chemical transformations.Ena Cratsenburg, Ginkgo’s head of business development, reiterated the idea of bridging existing platforms to new technologies. Cratsenburg pointed to its partnership with Synlogic, whose insights and expertise in discovery, translational, and clinical development is paired with Ginkgo’s expertise in high-throughput organism screening and design. Nicols states that its synthetic biology expertise, targeting radical overhaul of amino acid sequences, is now being exploited to advance a novel protein therapeutic discovery pipeline as well.“The idea of creating drugs via protein engineering is a relatively new idea,” Nicols says. Only in the last four years or so has the community realized just how powerful this approach is when it comes to protein therapeutics. He believes using synthetic biology as a tool for drug discovery is a new thought process.

Proteins have long been thought of as poor candidates for oral drugs due to their susceptibility to be broken down in the human GI tract. Thanks to recent advances in protein engineering, that’s no longer a truism. Photo by Joshua Coleman on UnsplashNicols also believes there’s a persistent misconception that proteins are poor candidates for oral therapies, because the small intestine is so effective at breaking down small proteins. “Through our sixteen-plus year history focused in aggressive industrial applications, we’ve designed proteins to survive at 100 degrees Celsius, in boiling ammonia, and even to prefer dimethyl sulfoxide to water.” At its quarterly earnings call, Codexis reported that its LEAD program designed to treat phenylketonuria (PKU) disease is shattering these misconceptions. Its protein therapeutic candidate for PKU is designed to withstand proteolytic attack in the intestines, enabling convenient oral administration. This would lead to an important design breakthrough, as the vast majority of protein therapeutics currently need to be administered to patients by the much less convenient means of injection or intravenously.

Synthetic biology may even be able to go one step further

Where traditional protein therapeutic candidates frequently invoke the body’s immune response, Codexis is using its protein sequence modification approach to potentially design away undesired immune response to its novel biotherapeutic candidates.Just as pharma needs to take a look at synbio, the synthetic biology community may need to re-introduce itself to Codexis too. Many may still associate with its earlier biofuels history. “We cut our teeth against very economically demanding targets,” Nicols says. “That forced continuous improvement in our CodeEvolver protein engineering, Codexis’ unique synthetic biology platform, to be able to hit these demanding performance targets faster, better, cheaper. Hundreds of millions of dollars of synbio infrastructure and artificial intelligent machine-learning software investment and a dead biofuel market later, we were poised to transform conventional pharma thinking.”

Engineering proteins to do things no natural proteins can do

“We rolled up our sleeves and started modifying and bending proteins like nobody else,” Nicols says. “We learned how to engineer proteins to do things no natural proteins can do.” In the process, Codexis’ culture shifted, and the team became engrossed in a culture of innovation that often forgot to look up from the lab bench to tell the rest of the world what it was doing.Partnering with big names like GSK, Merck, Tate & Lyle, and Nestle Health Science, Codexis quietly and successfully went about its business helping companies to create value by using its novel proteins.Codexis’ crown jewel is CodeEvolver, a licensable technology platform that combines AI, biology, fermentation, chemistry, and robotics. Rather than relying on natural product libraries, CodeEvolver generates and screens large numbers of de novo protein libraries custom-designed for users’ specific applications.“This platform is so good at radically modifying proteins,” boasts Nicols, “and we’re making it better every single year.”Codexis is putting that technology to good use in a growing set of industrial applications, but also with its own in-house drug discovery program, which now has six candidate therapies in its pipeline. The furthest along begins clinical trials this summer and is an oral drug to treat phenylketonuria (PKU), a rare inherited metabolic disorder where phenylalanine can build up in the body and cause serious health problems. Additional Codexis drug candidates focus on diseases caused by other enzymatic deficiencies, such as lysosomal storage diseases.

State-of-the-art protein engineering combines AI, biology, fermentation, chemistry, and robotics to reduce drug development costs, making it feasible to go after rare or undertreated diseases. Photo courtesy of Codexis.The ability to quickly and cheaply engineer protein therapies stands to reduce the typical drug discovery project from dozens to a handful of scientist-years per project. In the brave new world of biopharma, that means new market opportunities for companies. More importantly, patients with rare and undertreated diseases also stand to benefit, as small targets become more economically viable to pursue for big and small companies alike.Pointing to the growth of companies like Ginkgo, Amyris, Twist, alongside Codexis itself, Nicols says the bioindustrial transformation powered by synthetic biology is now starting to hit its stride.“Whether in manufacturing, drug discovery or both,” Nicols says, “the world’s pharmaceutical industry needs to take a lesson from Merck and GSK and get more proactive in exploiting the growing power of synthetic biology to improve its business going forward.”This article is made possible by Codexis. To learn more about the Codexis technology and drug development pipeline mentioned in this story, please visit www.codexis.com.John Nicolswill be speaking at the SynBioBeta 2018 Global Synthetic Biology Summit in San Francisco, October 1–3, as part of the Synthetic Biology Week. Register now!