The Rise Of The Robot Scientist 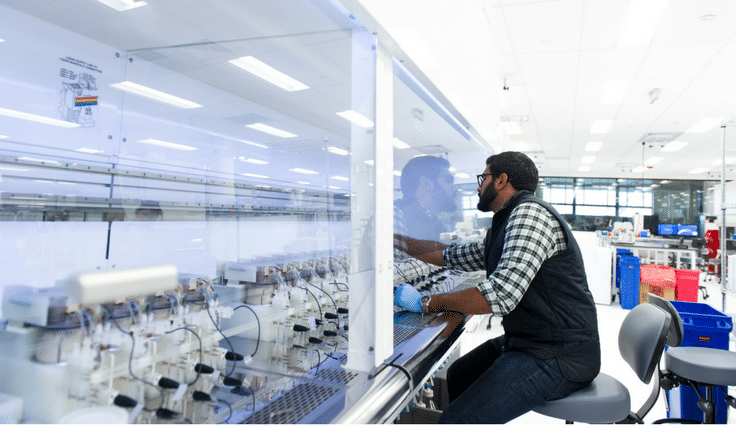 The Rise Of The Robot Scientist

Like it or not, robots are already ingrained in our everyday life. Their presence is not obvious because they don’t exactly look like Asimov’s creations, since instead of pursuing humaniform robots, we seem to have unanimously chosen to pursue those with human-like function instead, and in most cases, to go way beyond its capacity.A robot in science fiction was initially thought as servitude and as such, they were nothing to be afraid of. Robots that can sort our reagents and pipette our experiments seem practical and harmless. But what about the ones that can solve the same problems we are currently working on?It’s the question that’s being making the rounds for the last couple of years, first in futuristic niches like Singularity University and now spreading like a little wave of dread into the mainstream media: “Will a robot take my job?”According to a publication of the Research and Policy unit of the University of Oxford titled “The Future of Employment: How susceptible are jobs to computerization?” and the much punchier Replaced by robot website that popularized it, biotechnologists have a 30% chance of automation. While you’re letting out the breath you’ve been holding, let me remind you this report was published in 2013, when we were still freaking out about IBM Watson disrupting medicine and making doctors obsolete. Back then, the clinical leader of the IBM team training Watson for healthcare, Marty Kohn, stated to The Atlantic that “Watson fills in for some human limitations. Studies show that humans are good at taking a relatively limited list of possibilities and using that list, but are far less adept at using huge volumes of information. That’s where Watson shines: taking a huge list of information and winnowing it down.”This might seem a clear advantage for AI in the field of medicine, and many companies and initiatives have sprouted since then in an attempt to leverage data and artificial intelligence to make medicine more precise, personalized and available. From automated imaging diagnostics for remote settings to finding the right experimental treatment for rare cancer patients to radically accelerating drug discovery in orphan diseases, medicine has been taken by storm by hands that seem to be more than human.But what about biotech as a whole?Infrastructure seems like a space ripe for disruption. With science becoming increasingly democratized and with a drastic lowering of prices, needing access to a fully equipped lab seems way too 20th century. Cloud laboratories are spreading as platforms for on-demand, automatized experimentation, allowing scientists to remotely instruct robots to operate molecular and cell-biology facilities. Digitalization has come a long way from apps and software, and is now fully contributing to the decentralization of science.But even if we concede infrastructure and machinery are playing fields for robots, we might argue science itself could never be automated: it relies too much in human capacities that seem to go a step beyond logic, and yet is now constrained not only by current technological prowess but also our own biological limits. There’s too much information, too many connections to make, and way too little time to get them all in our heads.

Liquid-handling Lego robots and experiments for STEM education and research. Source:https://web.stanford.edu/group/riedel-kruse/publications.htmlhttps://web.stanford.edu/group/riedel-kruse/publications/Gerber%20RiedelKruse%20PLoSBiology%202017.pdfBioinformatics is a step ahead in solving our limitations. Combining big data and artificial intelligence seems like a no brainer for a discipline that has both computing power and biological complexity as its core, and it has already produced AIs capable of finding hidden patterns in highly complex time series biological data, to develop new treatments for MS and ebola, and even to automate research.The role of the bioinformatician has moved away from data computing and into creating algorithms able to learn by themselves according to what they’re exposed to. Computer scientists are now key in the process, working hand in hand with biologists not to process information on a machine, but to program machines capable of researching, discovering, asking questions. AI that can process is already here, disruption will come in the form of AI that creates, AI’s that can, as Science puts it, “Supercharge the process of discovery.”A taste of this disruption comes in the form of Asimov. Launched at SynBioBeta San Francisco 2016, Dr. Chris Voigt’s latest endeavor promises to optimize the printing and design of genetic logic gates through an AI that programs living cells using computer-aided design. It seems we have come full circle, and the robots we create are more and more like us, never an exact copy but rather a complement that learns from us and creates for us.Rather than looking at ourselves as being obsolete, we must understand the power behind AI to expand human capacity, especially when it comes to science.I, for one, welcome our new robotic partners.Be a part of the discussion at SynBioBeta SF 2017, where you will hear from John Nicols of Codexis, Elliot Menschik of Amazon Web Services, and Abraham Heifets of Atomwise during the “Big Data and AI Meet Biology” session, as well as Prof. George Church during the fireside chat on How Biology Meets Artificial IntelligenceTo enjoy more articles like this from SynBioBeta, click here to subscribe to our weekly news digest.