These 37 synthetic biology companies raised $1.2B this quarter 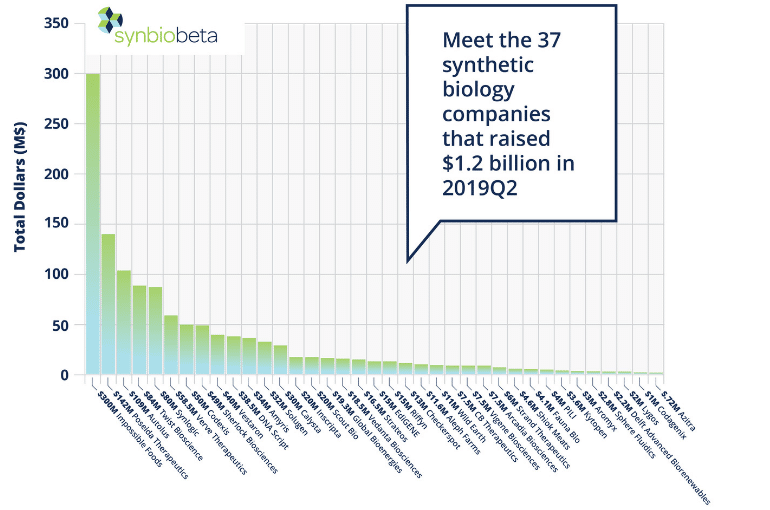 These 37 synthetic biology companies raised $1.2B this quarter

Crunchbase reports that startup funding is flat this quarter. But the synthetic biology industry doesn’t seem to have gotten the memo.SynBioBeta released its Synthetic Biology Investment Report for this quarter, detailing the top funded companies in the space, newly funded companies, and investment trends for the past several years. What follows are some highlights from the report -- download the full report for all the details.

Are we hot or not?

After the first quarter, the field was on track to set a record for the total number of investment deals, although the total amount of money being invested was not projected to beat out 2018’s staggering sum of $3.8 billion. But the second quarter of the year was the best on record, putting even better than the first, demonstrating that investor interest in both the public and private markets is strong and growing.Through the first half of 2019, 65 synthetic biology companies raised $1.9 billion in funding. Both of these numbers would be higher than any full year except for last year, which goes to show just how fast the field is growing. If investing keeps up at this pace, 2019 will see 33% more investment rounds worth about the same as last year -- $3.8 billion.

The Class of 2019: Reimagining pharma

Seven of the 37 companies funded this quarter are receiving their first round of investment, and of those seven all but one is related to therapeutic applications. This may be an indication that the tools and technologies of synthetic biology are enabling small, innovative, fast-moving companies to reimagine pharma and pursue market opportunities that were previously inaccessible. More importantly, patients with rare and undertreated diseases also stand to benefit, as small therapeutic markets become more economically viable for both small and large companies alike to pursue.

More companies are getting a piece of the pie

During a SynBioBeta 2018 investor panel (available online), Alicia Jackson of Genoa Ventures remarked that there is an unlimited amount of money in the world now, but that there is a very limited supply of great entrepreneurs. Despite that, 2019 is on track to fund about one-third more rounds than last year, suggesting that investor support for synthetic biology entrepreneurs and their technology is still high.

Overall, raising a large amount of money in a year is related more to having a few huge fundraising rounds rather than having a large number of companies raise. 2018 had a few of these, like Moderna and Zymergen’s combined $1 billion, which contributed to the large leap in dollars raised. Though Impossible Foods had a funding round in this range ($300 million), we will need several more rounds like this in order to continue setting records for funds raised.

What does it all mean?

Crunchbase reports that, in the broader North American investment market, there are a lot of data indicators pointing in different directions. IPOs were super strong, deal volume is up somewhat, but investment totals were flat. In general, the funding climate appears to be holding firm.The synthetic biology industry had a record quarter, with investors remaining bullish about the ability of biology to solve important problems, create better products, and drive new markets. And post-IPO performance has also been solid, with companies like Twist and Beyond Meat maintaining valuations well above their initial offering price.The continued growth of the industry is linked to the broader market, and could be significantly impacted by social and political factors such as a Green New Deal, the adoption of a federal roadmap for strategic investment in synthetic biology, or even our ability as a field to engage with the public and earn trust for bioengineered products. Time will only tell if any or all of these things will come to pass. For the time being, though, it seems the investment community is signalling full speed ahead.To learn what parts of the synbio stack are hot right now, who’s investing, and geographic funding trends, download the full report.Thank you to Marianna Limas and Kevin Costa for additional research and reporting in this article.