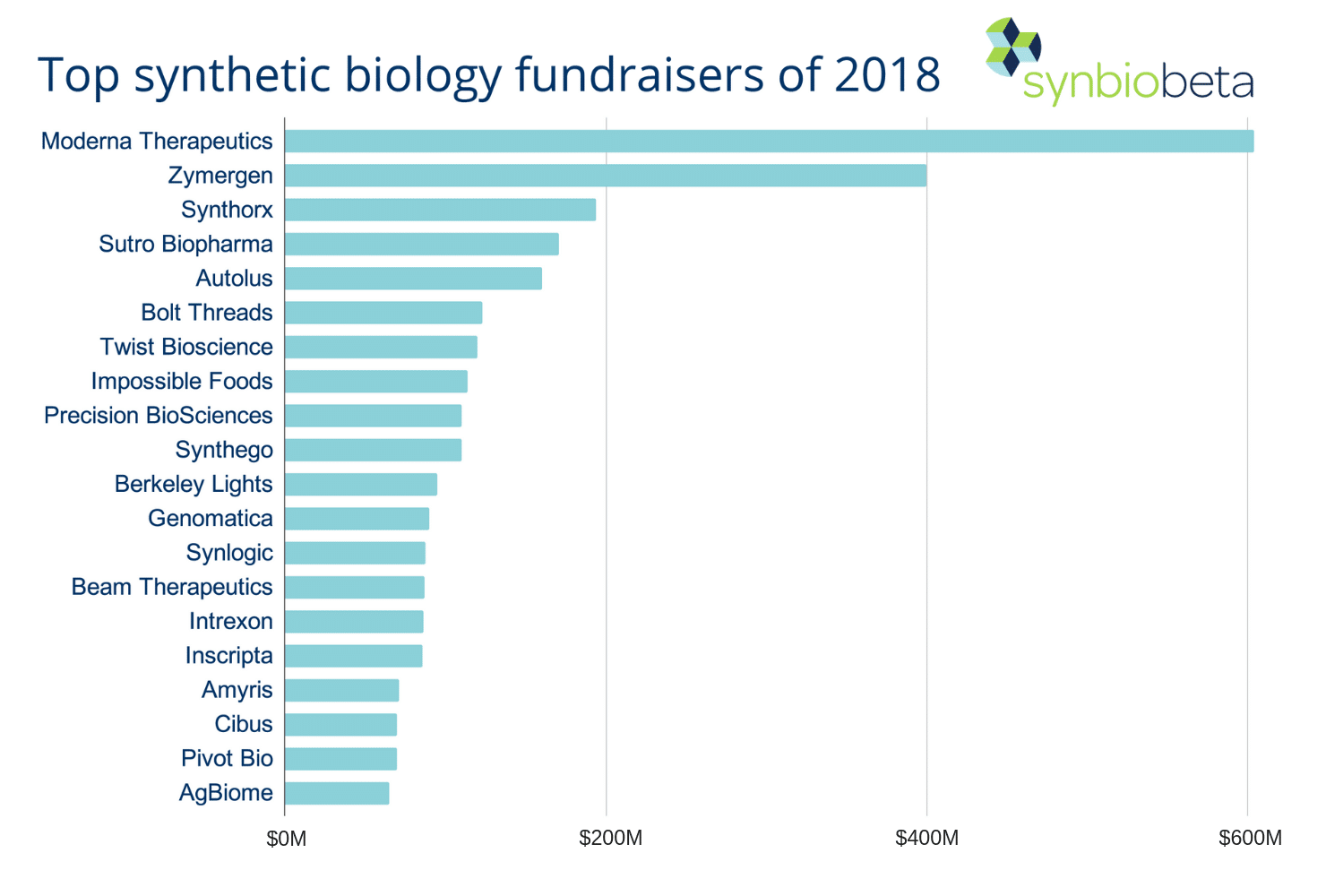 Every year, it seems the story is the same: Synthetic biology companies make amazing advances building engineered biological products, these advances receive widespread interest, and more money pours into the field to fund next year’s advances. In this sense, 2018 was no different. On the product side, companies are putting synthetic biology into leather bags, medicine, and even airplanes. Companies and founders in the space are regular guests on lists like CNBC’s Disruptor 50 and Forbes 30 Under 30. Frances Arnold of Caltech even won a Nobel Prize for her work in synthetic biology! All of this progress led to investors piling into the space, funding a record 98 companies to the tune of $3.8 billion dollars.

Bolt Threads’ Mylo™ Driver Bag is the world’s first commercially available product made from Mylo, a new sustainable material made from mycelium, the underground root structure of mushrooms, by Ecovative.Though past years have also seen billions of dollars going to synthetic biology startups, there are some marked differences this year. One of the driving forces behind the increased investment amounts was the fact that many synthetic biology startups that received early-stage funding years ago have now matured and are raising larger rounds. Synthetic biology is now even starting to hit the public markets. Last year there were three offerings of public stock that raised a total of $346 million, while this year we saw thirteen companies raise nearly $1.4 billion - nearly four times 2017’s total - from the public markets.One of the notable public offerings this year includes Twist Bioscience, which held its initial public offering on October 31st of this year and raised roughly $70 million (the company also raised $80M in private funding). Synthorx also held a successful IPO, raising $131 million to make protein therapies using synthetic amino acids. Both of these companies have had their stock price increase from where it initially was priced, even during a rough time for the general market, showing the optimism the public has for synthetic biology technologies. It was not only newly public companies that raised money from public investors. Both Intrexon and Codexis raised money in secondary offerings of their stock - $86 million and $32 million, respectively - in order to continue developing their new technologies.

Later-stage startups also brought in a ton of cash this year. Legendary late-stage investor Softbank Vision Fund made its debut in the synthetic biology scene this year by leading a $400 million Series C round for Zymergen -- the largest venture round ever raised by a synthetic biology startup. In addition to that monster round, Synthego raised a $110 million Series C and Bolt Threads raised a $123 million Series D. One company that will soon be releasing their product is Pivot Bio, who raised a $70 million Series B to assist with the commercialization of their microbial-based seed treatment. Companies advancing to the late stage and public markets are especially exciting as they can being returning money to early investors and employees, who can then turn around and use that money to help the industry continue to grow.

For-profit investors weren’t the only group that showed increased interest in the field this year. Governments across the world, seeing the huge potential synthetic biology could have on the world, poured over $50 million into synthetic biology companies in 2018. Amyris earned the largest chunk of grant money, having been awarded $25 million through two grants from both the EU and the NIH. The most prolific grantee was the USA DOE’s Bioenergy Technology Office. They distributed funds to a large number of synthetic biology companies that are all working to make our fuel greener, including ZymoChem, Arzeda, Visolis, and LanzaTech. These grants are an important source of early-stage funds that let a company prove their technology so that late-stage investors can invest with confidence.While enormous late-stage rounds stole the show this year, there were plenty of up-and-comers that successfully raised the money they needed to continue advancing their technology towards commercialization. Accelerators like IndieBio, RebelBio and Y Combinator funded a number of very early-stage companies, and every year there are more early- and mid-stage investors willing to put their money behind this impressive field. Some particularly interesting early stage companies that raised money this year are Opentrons, who are making laboratory automation more accessible by developing an open-source pipetting robot, and Mammoth Biosciences, the makers of a CRISPR-based disease detection platform whose founders made the 2019 Forbes 30 Under 30 list. Azitra, developing a microbiome-based skin product, also raised $2.15 million with a convertible note.Having doubled last year’s fundraising, one might be tempted to say that next year might not beat this one, but after four consecutive record years it’s hard to see the flow of cash slowing down. We are poised for another exciting year in synthetic biology both from the new companies people are forming and from the new products current companies will be releasing.Thank you to Marianna Limas for additional research and reporting in this article.