Transcriptic: Building The Lab of the Future 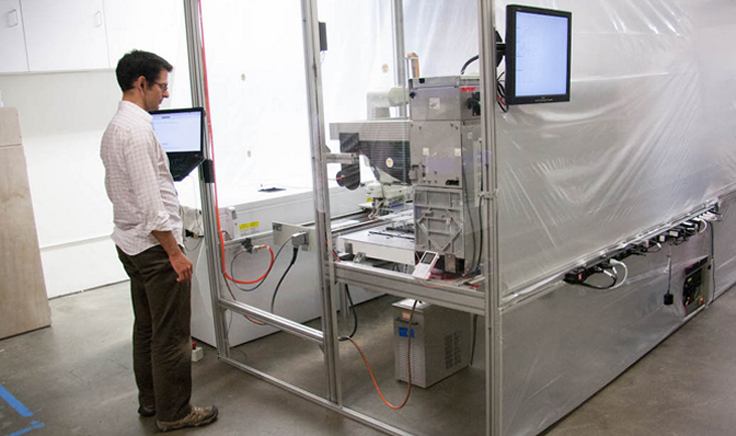 Transcriptic: Building The Lab of the Future

Transcriptic, a cloud-based, robot-operated laboratory, recently raised $8.5 million in Series A funding, bringing total investments to just over $14 million in addition to a partnership with Y Combinator. As Transcriptic’s blog is apt to point out this influx of money is not the success in itself. It has merely set the company up with a massive amount of potential to revolutionize the way in which biological scientists conduct research.As a customer of Transcriptic from their very early stages, I can attest to the speed at which they are adjusting and evolving to best meet the needs of their clients. While I can’t say the ride has been without bumps, I believe Transcriptic is headed in the right direction. Allow me to explain...When I was still an undergraduate researcher at Berkeley, a sixth-year PhD candidate once described his job as “moving small amounts of liquid around, in an attempt to add to the growing body of synthetic biology literature.” I didn’t get the joke at first; I just thought he was being self-deprecating. However, fast forward several years later to the 2014 SynBioBeta Conference when Max Hodak, CEO of Transcriptic, poignantly stated: “People spend 15 years in school to end up moving small volumes of liquid around,” the joke finally hit me. It’s funny because it’s true.Now a third year PhD student and a seasoned veteran of synthetic biology lab work, I’m well versed in the reality of that statement. If a person were to casually observe my day to day activities in lab, they would surely conclude moving small amounts of liquid was my primary objective: a job a chimpanzee wouldn’t do for all the juice in Costco.Like many people in my position, I can’t help but feel a bit overqualified to function as little more than an arm connected to the three neurons it takes to coordinate the myriad functions of a pipette: up, down, and eject. But for synthetic biologists there really isn’t any other option. More accurately: there wasn’t any other option, until Transcriptic.Unlike me, who had abjectly surrendered long ago to the tyranny of the pipette and it's accursed cousin, the 96-well plate, Max Hodak thought to address this problem head-on. A novel concept in my book. With the creation of Transcriptic he envisioned a world where, “two postdocs with a laptop in a coffee shop run a drug company” without ever pipetting so much as a picoliter. All the coffee with none of the grunt work: a graduate student’s dream.The idea behind Transcriptic is simple: create a purely robotic laboratory that biological researchers can control remotely. The idea of using liquid handling robots is not new. In fact, both my former and current lab flirted with the idea of acquiring such a robotic pipetting servant, but found the reality to be less than ideal. What’s new is the idea that you don’t need to physically own these machines, and in fact, that is a more preferable setup to many. Transcriptic witnessed “wealthy labs buying $200,000 robots that would sit idle on the bench after six months of use because they were too complex for regular use.” I know this is true because it happened in my lab at Berkeley. For the full year and a half I was there, a dinosaur of a pipetting machine sat lonely, sprawling lazily across an entire workbench, collecting cobwebs, and wondering if anyone loved it. The answer was no, no one loved it. No one wanted anything to do with it.So why would controlling such a machine from the cloud make it any more appealing to use? That is a question Transcriptic has worked hard to answer and - as the company develops - is nearing a solution. Several advantages of cloud-controlled robots are immediately obvious:

This is all fantastic, but the most important question still needs to be answered: “Is it convenient?”If you are a startup or a “biohacker” that does not currently have access to a lab, then the answer is a resounding yes, it’s convenient. If you do currently have access to a lab, the answer is… well, soon. As an early customer of Transcriptic who has full access to an academic laboratory, convenience combined with cost effectiveness is still a gray area, but it’s definitely almost there.Months ago, I used Transcriptic as a cloning service. I would send them DNA templates and they would reassemble them into a final product of my choosing. The robots handled all the lab work, but humans had to code and troubleshoot my cloning projects. This worked great for me, but Transcriptic has since stopped explicitly offering cloning services. I was a little miffed at first but have come to understand that from a business perspective that was never quite a sustainable service.It dawned on me I was just passing on my grunt work to another highly educated person, and they had names like “Cornelia Scheitz, PhD” and “Yin He, PhD”. These people actually had their PhD already. So it seemed rather unfair for them to be doing mine, also.Fortunately for Cornelia and Yin, Max most likely never intended to set up a post-doctorate sweatshop for outsourcing the work graduate students like me were too lazy to do. It appears he, instead, intended to build a lab that could be accessed and controlled remotely with no start-up costs for the user. Transcriptic’s objective isn’t to simply shift people’s workloads around. Rather, it is about giving people access to powerful machines, by which they can do their own work more efficiently and more reliably.The problem is, I wasn’t willing to learn a new computer language so I could code every last movement of the robot down to: “move pipette arm from Well A5 to Tube C7”. I wanted really high-level commands. Commands like: take this template DNA and make this final plasmid product. Luckily Transcriptic has addressed this problem and is enabling my code-learning apathy through the development of click and drag protocols, and an open source protocol language, Autoprotocol, that will serve as a standard while more publicly available protocols are created.As if they were directly speaking to me, their blog mentions, “If the structure of Autoprotocol looks intimidating to you, never fear” and unveiled what they are calling Autoprotocol Core -- something I’m personally most excited about -- which the site describes as, “a library of standard protocols in order to provide examples to follow and allow you to avoid the need to write any code at all for some common use cases.” A major step toward convenience, and a service I am excited to use.Transcriptic is still a growing company, but with each step they seem to be headed in the right direction. Recently they deployed a way for users to buy reagents directly through their site at a pay-for-what-you-use price and I imagine once Autoprotocol Core has been a bit more developed, Transcriptic could be one of the greatest resources for biological scientists everywhere and anywhere (Personally, I’m thinking on the beach in Southeast Asia).My only question now is what will I do with all my spare time? Maybe I’ll pick up the lost art of Japanese calligraphy or the Hun technique for firing arrows from a galloping horse. Who's to say - the possibilities are endless.