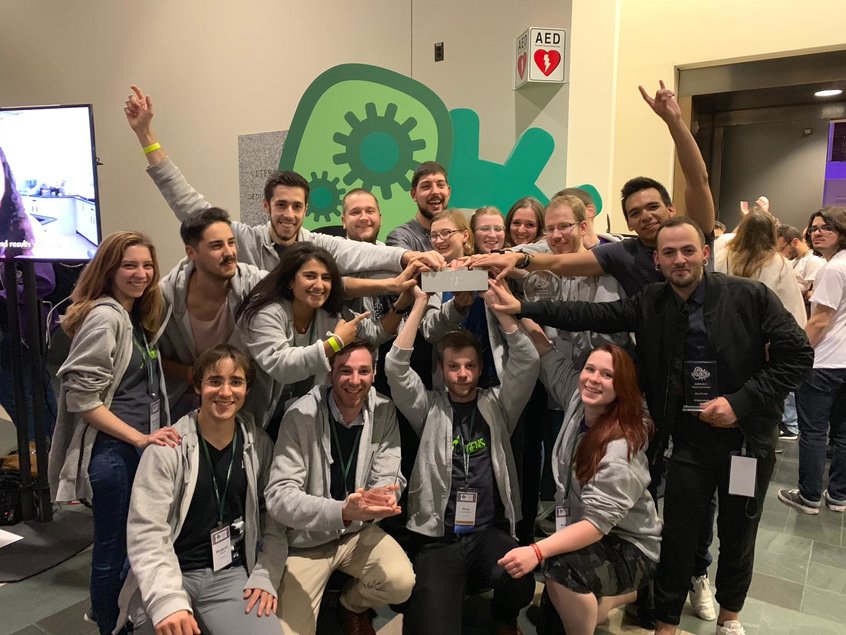 This year’s iGEM Giant Jamboree resulted in a real-life science fairy tale for the grand-prize winning team in the overgrad division, Team Marburg, a team of 15 Masters students in Germany studying traditional biology, molecular and cellular biology, chemistry, physics, and computer science. What began as an idea born at a conference in 2017 -- and largely made possible by an OT-2 pipetting robot from lab automation leader Opentrons -- ended with a grand prize and a new biological tool that could change the way synthetic biologists create new metabolic pathways, genetic circuits, and other DNA constructs.The winning project? VibriGens, based on a new bacterial chassis organism: Vibrio natriegens, the world’s fastest growing bacterium with a doubling time of only 10 minutes or less (in comparison, the gold standard chassis organism, E. coli, doubles every half hour). The team worked to establish protocols for cloning, protein expression, and protein interaction studies with V. natriegens and established a set of strains -- which any researcher can email the team to ask for -- optimized for each application.They also created the “Marburg Collection,” a golden-gate-based cloning tool box that enables researchers to combine any plasmid origins of replication, antibiotic resistance, and target genes they want -- removing the need to rely on vectors. While the cloning tool box was initially created with V. natriegens in mind, the team ultimately designed it to be universally applicable for a number of different host organisms. Like their optimized strains, the Marburg Collection will also be made available to researchers.

Once upon a time … an idea was born

The selection of V. natriegens was not by accident. The team first heard about this organism at a conference held in Marburg in 2017 by the German Association for Synthetic Biology. One of the speakers was presenting on V. natriegens, and when the team learned not only how quickly it grows, but also that no one was really using the organism, they began thinking about using it to help the synthetic biology community.“We thought, it's an organism which has never been used in the iGEM competition, so we could implement a new thing -- it could really help a lot of people. Because in every field of synthetic biology, you need an organism to build your constructs. So we would have a project which influences everybody, and therefore we thought it could be good for us to establish it,” explains team member Daniel Marchal.Because it lives in saltwater, V. natriegens can also tolerate much higher levels of salt than E. coli, making it more applicable for some environmental applications where higher salt content is necessary (for example, optimizing bacterial degradation of plastics in the ocean). Because most organisms can’t tolerate high salt levels, protocols using V. natriegens are also less likely to suffer from contamination, says team member Rene Inckemann -- critical when highly pure DNA or protein is the end goal.The potential for increasing speed from product design to market is also something the team emphasizes. Inckemann likes to use the example of the antimalarial drug Antimycin. “Development of Antimycin took like seven years. Just imagine, if you had used a Vibrio, could we speed up those processes, the development time of that?” he questions. He also sees Vibrio as a useful tool for synthetic biologists studying protein evolution and engineering proteins and enzymes, or designing genetic circuits. Basically, the speed of developing all sorts of parts can be increased by using the world’s fastest growing organism -- and that’s a good thing for synthetic biology.As more research groups, companies, and other organizations strive to speed up various aspects of synthetic biology research, the synthetic biology stack -- the layered integration of biological reagents, process execution tools, and Bio CAD/CAM tools to facilitate rapid product design and development -- is growing. Having essentially created a new tool in the biology layer of the synthetic biology stack, Team Marburg is well on their way to meeting their goal of making science faster and easier for synthetic biologists all over the world. And automation played a critical role in helping them get there.

Making the project possible through automation

“When you think of cloning in one day or in 12 hours -- what we are proposing, a lot of people would say that’s too much to pass for implementing that in the daily workflow. And we got that response quite early in the project,” says Inckemann. “So we thought about lab automation and how we could get access to that quite early.” The team submitted proposals to several lab automation companies to get automation support for their project. One company was Opentrons.“We received 77 proposals in two weeks,” says Kristin Ellis, Director of Scientific Development at Opentrons, which found it difficult to choose only ten teams from all of the outstanding submissions they received. But selecting Team Marburg was a “no-brainer.”“I was blown away by their proposal,” Ellis says. She was especially compelled by their vision to reduce the time of bacterial transformation from days to 12 hours -- the same vision that many others were dubious about. Ellis also appreciated Team Marburg’s proposed iGEM interlab study through which they planned to share V. natriegens and their protocols with other iGEM teams to learn how the bacteria behave in other labs. This was an especially important component to Opentrons, which emphasizes and supports open source, collaborative, and reproducible science.Because the OT-2 hadn’t even been released yet at the time proposals were due (it was announced in March and released in June), Team Marburg and the nine other iGEM teams that received an OT-2 were some of the first people in the world to use the robot -- guinea pigs, as it were, for a brand new product.“None of us had real experience with lab automation -- some of us had a couple of university courses, but not real experience,” says Inckemann. “But it turned out to be quite easy to use the OT-2.” In fact, their first protocols, replicating strains in 96-well plates, were set up and running on the OT-2 in just a day. Critically, having the OT-2 allowed the team to spend their time designing and conceiving the project while the robot ran the experiments for them, saving months of human time and allowing the team to finish their project over the summer.The team even had time to build their own tools on top of the OT-2 software -- something that Opentrons encourages all of their users to do. Team Marburg built an easy to use interface that allows users to choose from among the 8 components, or “tools,” available in the Marburg Toolbox. Once they make their selection, the robot knows what to do with each component, building the user’s custom plasmid without any further input.

A story with a happy ending

“Not only did they propose an amazing project, they actually achieved it,” says Ellis. “We knew we wanted to empower iGEM teams to experiment, collaborate, and share using powerful open-source automation, but we didn't want to be prescriptive about how the teams we selected would use the OT-2 -- and we were absolutely blown away that this team used Opentrons to go all the way to the grand prize win. Nobody could have made up this story. It’s just amazing, and the team is so inspirational.”Team Marburg is not the only team with an OT-2 to have a successful Giant Jamboree. Most of the teams won medals for their work (seven of those were gold!) and team NCKU Tainan won the special track awards for Best Environment Project and Best Presentation in the undergraduate category. Several other OT-2 winning teams were finalists for special track awards in categories such as Best Energy Project, Best Poster, Best Entrepreneurship Project, and Best Measurement. "Every single one of these teams did outstanding work. It's wonderful to be in a position that enables us to provide support for all of these students and their projects," Ellis adds.“The shared values of Opentrons and iGEM is really what has made this story possible,” says Will Canine, co-founder and CPO of Opentrons. “Thinking back, we launched our first robot, the OT-One, at iGEM 2014, which really was critical to get the company off the ground,” he adds. “Now, four years later, the teams are [using the OT-2 to do] these incredible projects and win big prizes. It’s really satisfying to be able to give back to them.”